You are here: Home » Articles filed under: 'News' » Article: 'NMA first major redesign is a triumph'

October 6th, 2022 | Browse other: News. | Tagged with: the first major redesign of the National Museum of Australia is a triumph | 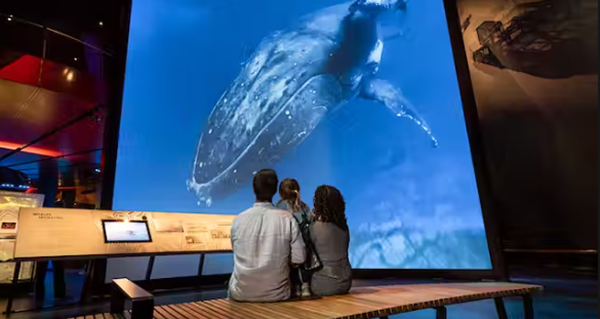 Kylie Message, Finally bold and imaginative: the first major redesign of the National Museum of Australia is a triumph, The Conversation, 4 October 2022

The National Museum of Australia has just opened the most significant redevelopment in its history.

Costing $25 million, Great Southern Land weaves 2,000 objects into a natural and cultural history to show how the Australian continent has influenced and been impacted by human decisions.

The new gallery provides a place to share and explore ideas about Australia and our place in it, and to consider what actions might be necessary to ensure the nation’s future.

The exhibition is beautiful and sophisticated. Quiet where it needs to be quiet and boisterous and fun-loving in other parts, it engages all our senses as we gaze in wonder at the life-sized orca models suspended from the ceiling and squint to see the tiny fragments in display cases at knee level.

It is a pivotal moment in the ongoing life of the museum, and the nation.

Aspirations for a national museum were precisely outlined in a report presented to government in late 1975. But the fall of the Whitlam government meant the political momentum for the proposal went by the wayside.

The National Museum of Australia wouldn’t open until 2001. At its launch, then prime minister John Howard criticised it as being “un-museumlike”.

Its colourful façade and shiny features jarred against Canberra’s landscape of brutalist-designed national institutions. But the museum’s difference was more than skin-deep.

Every part of it, inside and out, represented Australian history as resulting from the entanglement of many stories. Its exhibitions provided spaces for social and political commentary and challenged the credibility of national myths, particularly around the frontier wars. 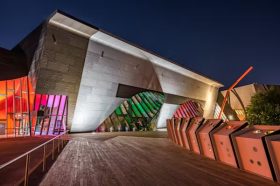 Almost as soon as it opened, the museum was engulfed in fierce controversy, attacked for being both too political and not political enough. One headline in the Daily Telegraph read “museum sneers at white history of Australia”.

In a short time, polarised views hardened into attitudes, with supporters and critics both accusing the other side of distorting history to promote a political agenda. The clash culminated in a government review in 2003.

A new type of museum

Part of the problem was the museum didn’t explain why it was so different from more familiar 19th-century-style institutions like the Australian War Memorial.

The National Museum of Australia included artefacts from recent events, things like “the small black dress” worn by Azaria Chamberlain when she was taken from her family’s tent at Uluru in 1980.

It addressed the visitor as “you”, and tried to hook them into conversations about the nation by asking them to reflect on personal experiences.

Its peers included Te Papa Tongarewa and the National Museum of the American Indian: reflecting a global museum movement that emphasised the voice of First Nations and marginalised peoples and aimed to disrupt colonial narratives.

The museum that opened in 2001 came across as overly enthusiastic, didactic, even dogmatic in parts. Instead of showing how meaning was developed, for example, by saying something about how objects were collected, its displays jumped from spectacle to spectacle.

Great Southern Land is the first major redesign of the museum since 2001.

As visitors enter the new exhibition through a darkened grove of towering Bunya trees, it is clear from the outset the redeveloped gallery has better articulated the 1975 plan’s ambitions for the museum to be “bold and imaginative”.

It also realises the plan’s focus on the Australian environment, Aboriginal history, the history of Europeans in Australia and the intricate relationships between people and the environment. 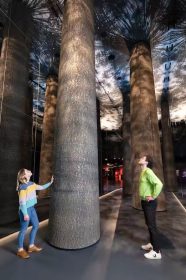 The bunya forest inside the Great Southern Land gallery at the National Museum of Australia. Supplied NMA.

The Bunya forest is to scale and awe-inspiring. Kids rush to touch and try to get their arms fully around a tree trunk. It introduces all aspects of the new exhibition, including the museum’s centralisation of partnerships and consultation with First Nations people and communities.

The sprawling gallery leads to the zoological specimen of a thylacine in a bath of preserving liquid. It lies prone, in the centre of the exhibition. It is, perhaps along with the Bunya forest, the most moving object story. But the extinction icon evokes horror and sadness rather than joy and awe. It tackles the decades of wilful and unintended mistreatment the artefact has endured, including by the museum.

The thylacine reiterates the museum’s attention to interconnections between human and natural history. Felted thylacine joeys made by Trawlwoolway artist Vicki West in 2019 are also displayed, showing the shared history of exclusion and oppression.

Great Southern Land is part of the institution’s remit to “to be a trusted voice in the national conversation”. 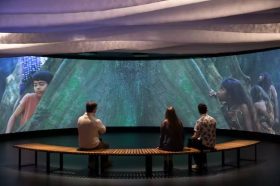 View from inside the Great Southern Land gallery at the National Museum of Australia. Supplied NMA.

Its ambition is backed up by studies showing even despite being caught up in the culture wars, museums remain one of Australia’s most trusted institutions.

It also talks about the human side of trust. A phone box destroyed in the Cobargo 2019 bushfire sits alongside a power pole from Cyclone Tracy in 1974. A community member from Cobargo says these objects represent what happens when major infrastructure fails and community doesn’t.

In this new gallery, the museum is surer of itself. It communicates an awareness of its own responsibilities as a national museum that has had to reckon for decisions made historically by it and in its name.

It understands the gravity and necessity of its role in reaching out to people, and expects visitors to come prepared to practice intellectual curiosity, self reflection and respectful discussion.