You are here: Home » Articles filed under: 'News' » Article: 'NMA in Ainu repatriation' 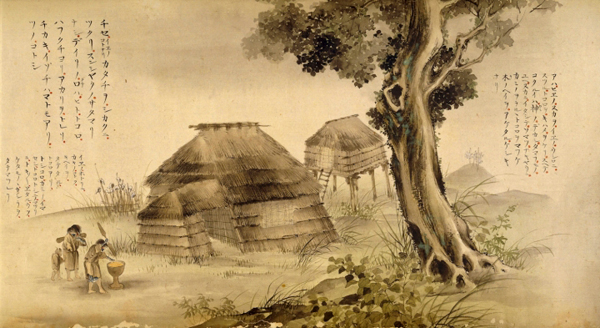 Handscroll scene of Ainu life, as depicted by Hirasawa Byōzan (1850–99) (via British Museum/Wikimedia).

It would be the first repatriation of remains to the indigenous people by a foreign country.

After being exhumed from their graves without permission in the early 20th century, the remains of several Ainu people are expected to return to Japan from two Australian museums. The Asahi Shimbun newspaper reported that, during a June 8 visit to the Ainu Association of Hokkaido, Australian Ambassador Richard Court said the two museums “have agreed to the return of the three sets of Ainu remains” and await a formal request from the association. It would be the first repatriation of Ainu remains by a foreign country.

Brigit Katz at Smithsonian.com explained that, with Japan’s passage of the 1899 Hokkaido Former Aborigine Protection Act, which encouraged them to practice agriculture, the Ainu were labeled “former aborigines” and thus people to be assimilated. Their culture was considered “primitive,” and anthropologists in the 20th century studied their supposedly obsolete way of life. This research was almost always done without consent from the Ainu, and sometimes with deceptive tactics. For instance, researchers took blood samples under the guise of being medical professionals interested in addressing the Ainu smallpox epidemics.According to the Japan Times, Australia alerted Japan in May to the remains held by two institutions, including the National Museum of Australia. The bones were exported to Australia between 1911 and 1936 for anthropological research. The Ainu are an indigenous people of both Japan and Russia whose traditional homes include the islands of Hokkaido, Sakhalin, and Kuril. It was only in 2008 that Japan officially recognized them as such, following decades of assimilation and discrimination.

In 2013, following a yearlong survey, Japan’s Ministry of Education, Culture, Sports, Science and Technology stated “that the bones of over 1,600 Ainu are still being stored at 11 universities across the country,” according to the Japan Times. The return of those stolen remains, as well as others outside the country, has been slow. Last July, the bones of 12 Ainu were reburied after a court-mediated settlement with Hokkaido University. This January, the Berlin Society of Anthropology, Ethnology and Prehistory announced it would return an Ainu skull, and in March Hokkaido University agreed to repatriate remains disinterred in the 1930s. Australia’s return of Ainu remains could set an important precedent for overseas repatriation, helping to heal a history of cultural degradation.