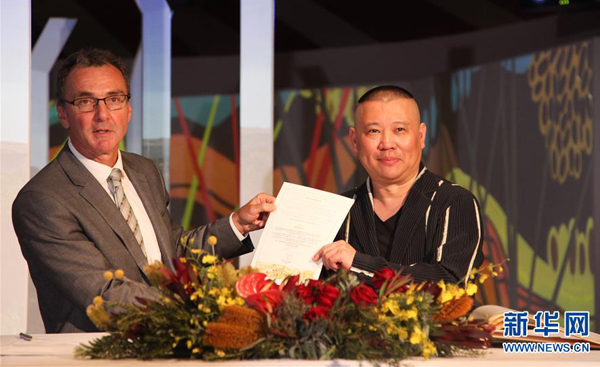 Guo Degang, a popular Chinese traditional crosstalk performer, signed a letter of agreement on March 29, 2018 with the National Museum of Australia to become the museum’s cultural ambassador in China. [Photo/Xinhua].

At the signing ceremony held at the National Museum of Australia (NWA), Guo said he was honored to take the role.

Under the agreement, Guo will promote the NMA’s programs in China, the first of which will be a major exhibition of bark paintings on tour in China starting from July this year.

The Old Masters exhibition featuring over 150 artworks and objects will open at the National Museum of China in Beijing in July 2018, ahead of a 20-month tour. It will later open in cities including Shanghai, Chengdu and Shenzhen, among others.

It will be the first time that the bark paintings be exhibited outside Australia.

“Arts recognize no boundaries … I think art is a very good bond to link people together and promote exchanges,” Guo told Xinhua at the signing ceremony.

“The National Museum is committed to taking the Australian story to the world and we’re delighted to partner with Mr Guo to help us reach Chinese audiences,” said Trinca.

“Through the long history of having worked with China, taking our first exhibition to China in 2002, followed by other works that we’ve been engaged in with our Chinese colleagues through agencies, museums and galleries, we always found those relationships are strong, enduring and constant,” he said in an interview with Xinhua.

“And ultimately, if we have cultural understanding of each other and I think that deepens and broadens the basis upon which all parts of the relationship can flourish.”

NMA opened its doors to the public in 2001 in Australia’s capital city Canberra. With over 2,000 works of art on bark, the museum holds the world’s largest and richest collection of bark paintings.