You are here: Home » Articles filed under: 'News' » Article: 'NMA & NGA reopen to the public'

NMA & NGA reopen to the public

June 4th, 2020 | Browse other: News. | Tagged with: National Gallery, National Museum of Australia, NMA and NGA reopen to the public | 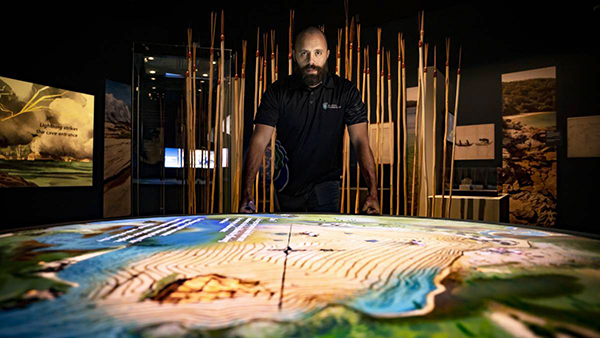 Chairman of the Gujaga Foundation Ray Ingrey at the launch of the National Museum of Australia’s Endeavour Voyage exhibition on Tuesday morning. Picture: Sitthixay Ditthavong.

When the National Museum of Australia opened on Tuesday morning for the first time in more than two and a half months there were already keen members of the public waiting to have a look.

On the other side of the lake, there was a similar scene at the National Gallery of Australia, which was also opened again after the ACT government eased more coronavirus restrictions last Friday.

Federal Minister for the Arts Paul Fletcher was on hand at both openings.

The National Gallery will have a timed ticketing system and will only allow 20 visitors into the building at any one time. 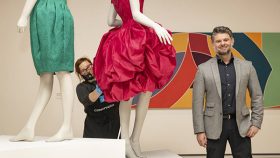 The National Museum of Australia has only opened one exhibition space at this stage, along with its shop and cafe. Some exhibits have been moved to the internal atrium at the front of the museum. A timed ticketing system will also be used in busy periods.

National Museum director Mathew Trinca said he was particularly excited to be opening the museum’s doors.

“It’s tremendously exciting to be opened, I can’t tell you how energised and enlivened we feel about the prospect of being able to welcome back people to the museum,” he said.

“Museums aren’t meant to be closed, museum directors are not meant to close the museums, we are meant to keep them open and see them grow.”

Dr Trinca said the permanent exhibition space would gradually open over the coming weeks and months. However, about one-third of the space was already closed for construction, which is expected to be completed next year.

The exhibition space opened at the National Museum of Australia will showcase the landmark Endeavour exhibition that was two weeks from opening when the lockdown was announced. 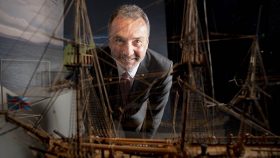 The exhibition looks at the 1770 landing of the Endeavour, helmed by Captain James Cook. The exhibition expands on the often one-sided narrative and showcases the view of Aboriginal and Torres Strait Islanders as the ship wound its way up the east coast.

“The tragic violence surrounding the beginning of the Botany Bay encounter demonstrates a failure of dialogue, just as events in Cooktown just a few months later demonstrate intercultural collaboration and understanding and are described by locals as the nation’s first act of reconciliation,” Dr Trinca said.

Members of the Kamay Aboriginal community helped to shape the exhibition. This included the chairman of the Gujaga Foundation Ray Ingrey, who spoke at the opening on Tuesday. Kamay is also known as Botany Bay, where Captain Cook landed.

“The first meeting we had with the National Museum was to put out a couple of guiding principles that we wanted to work around marking 250 years of the Endeavour coming into Kamay,” he said.

“One of those was to let us tell our story our way and to our surprise, the National Museum said yes.

“Previously we were excluded from telling our story our way and hence why in 1970, 50 years ago, before marking the 200th anniversary our community protested.”

Mr Ingrey said a language, research and cultural team in the Kamay community worked with academics, historians and the National Museum worked together over two years to develop a “balanced” exhibition.

“It was an unreal experience and everything we put us was never knocked back,” he said.

“There’s the story from the shores being told with balance from the ship as you go through the exhibition… it’s a balance that’s probably taken some time but we’re here.”

The exhibition was originally supposed to finish on October 11, but Dr Trinca said the museum would look to extend that.

“We want to run it over the summer, we just have to work with some members who lent us objects and we borrowed objects from other institutions abroad,” he said.

“We’ll have to do a bit of negotiation before we can absolutely say we’ll extend it.”

Objects on display at the exhibition include a 1773 portrait of Captain Cook, three of the four spears taken by Cook from Botany Bay in 1770 and Cook’s journal.