You are here: Home » Articles filed under: 'News' » Article: 'NMA opens Faith and Culture in Islam'

April 26th, 2018 | Browse other: News. | Tagged with: Faith and Culture in Islam, National Museum of Australia, So That You Might Know Each Other exhibition | 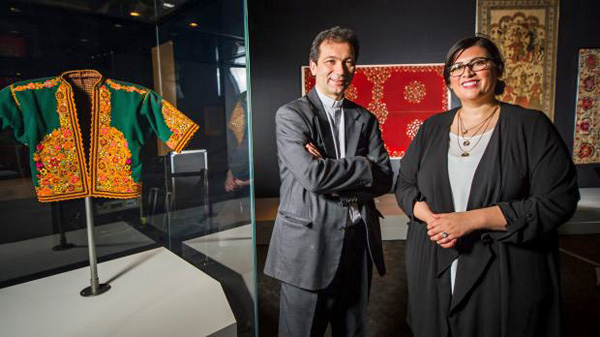 Vatican Anima Mundi Museum of World Cultures director Father Nicola Mapelli and Sharjah Museum’s authority director general Manal Ataya at the launch of So That You Might Know Each Other: Faith and Culture in Islam. Photo: Elesa Kurtz.

An international exhibition celebrating Islamic culture will open at the National Museum of Australia on Friday.

The museum’s director,  Dr Matthew Trinca, said “nothing makes me prouder than the fact this exhibition is opening here at this time.”

So That You Might Know Each Other: Faith and Culture in Islam brings together for the first time in Australia 100 artefacts from the Sharjah Museum of Islamic Civilisation and the Vatican Anima Mundi Museum of World Arts and Cultures as well as artefacts from Australia.

The artefacts, representing Islamic civilisations from around the world,  include ceremonial hangings, musical instruments, armour, precious manuscripts, ceramics and jewellery.

Among them are a 19th-Century Meshla, or overcoat, believed to have been woven in Aleppo or Damascus in Syria,  a 200-year-old suit of war armour from the Mindanao region of the Phillipines and a gold-embossed illustrated Koran manuscript believed to have been hand-lettered during the Ottoman Caliphate in 1823.

Two of the exhibition’s organisers were Father Nicola Mapelli, the director of the Anima Mundi Museum of World Arts and Cultures, and Manal Ataya, director general of the Sharjah Museums Authority.

Ms Ataya said the current exhibition had its origins in 2014 when the Vatican offered a selection of its holdings to the Sharjah Museum of Islamic Civilisation for an exhibition of the same name, inspired by a verse from the Koran.

She said in a time when misinformation and rhetoric were often about,  a museum was “a safe space” to initiate conversations about faith and culture.

While this was to be the only Australian venue for the exhibition, Ms Ataya said she hoped it might travel to other countries, such as China, and include local elements from their Islamic cultures.

Father Morelli said while people tended to associate the Vatican’s art with the likes of Raphael and Leonardo da Vinci, more than half its collection was of non-European origin.

“The core of its collection began in 1925 with Pope Pius XI,” he said.

With the rise of fascism, the Pope wanted to promote culture and religion on the occasion of the Universal Exposition in Rome and asked the people of the world to send objects, and many did – including Islamic countries.

The items in this exhibition were a small but representative part of the collection, he said.

“It is important for us to share a commitment to sharing between cultures and between religions.”

The exhibition is being sponsored by the Embassy of the United Arab Emirates in Australia and under the patronage of the Sharjah Museum of Islamic Civilisation.

So That You Might Know Each Other: Faith and Culture in Islam opens at the National Museum of Austraia on Friday, April 20 and runs until July 22. For more information visit nma.gov.au.