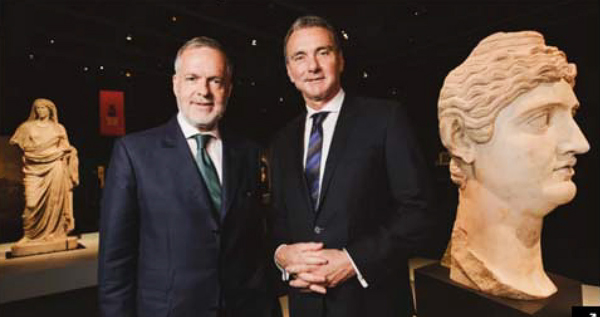 Serena Coady, Why ancient Rome is the civilisation we can’t forget, The Canberra Times, 21 September 2018

There comes a moment in life when one learns about the Roman empire for the first time.

Mass-scale violence, bloodied gladiators and nude symposiums aren’t typically deemed appropriate for children’s ears. But for many of us, it was during school when we first heard of ancient Rome, as if the sheer scale and cultural significance of the empire suddenly made us privy to the gory details.

“As a kid growing up in Newcastle, obsessed with Asterix comics borrowed from the local library, I have long been fascinated with all things Rome,” said National Museum of Australia curator Dr Lily Withycombe, who worked with the British Museum on Rome: City + Empire.

“This early immersion in ancient Rome has led to a lifelong passion.”

It’s a passion clearly echoed in the exhibition, which launches Friday at the National Museum.

When entering the space, the words “As long as the Colosseum stands, so will Rome. But when it falls, then Rome will fall and with it the entire world” explode across the wall behind a 1.76-metre statue head of Empress Faustina.

The exhibition features over 200 artefacts from the British Museum, including the bust of an “ageless” emperor who was among the cruellest in history, an intricate casket for women’s toiletries and a “she-wolf” figurine.

The scope of artefacts provide a cross-section of Roman history, myth and everyday life.

While the grandeur of ancient Rome has entered our collective conscience through film, television, art, theatre and other modern manifestations like the gaudy Caesars Palace, it’s perhaps the museum’s inclusion of everyday aspects which is most compelling.

“The exhibition tells the story of not just the greats, the elite, the authorities of Rome, but also the everyday lives of the people in the street,” National Museum director Dr Mathew Trinca said.

Ancient wine decanters and a 65-litre jar used to transport olive oil provide an interesting parallel to how we view modern-day Italians … as connoisseurs of food and wine.

The exhibition provides a space for visitors to match their present understanding of ancient Rome to the physical artefacts on display, but also consolidates the empire’s influence and how tales from Rome became stories of personal significance for so many across the world.

“Ancient Rome was home to a civilisation that truly did change the world,” Dr Trinca said.

“So much of the way we think about politics and civic life seems to draw on ideas and notions from ancient Rome.”

Dr Trinca says that Rome: City + Empire, their third collaboration with the British Museum, has bolstered the ongoing relationship between the museums.

Both parties signed a memorandum of understanding on Wednesday. This means they will work together for the next five years to collaboratively undertake research and bring more collections to Australia.