A new exhibition and introduction to the First Australians gallery showcases objects drawn from the National Museum of Australia’s extensive Indigenous collections. 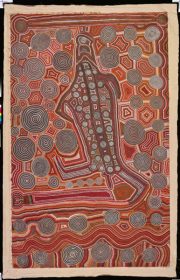 ‘The undeniable power of the objects draws visitors into the Aboriginal and Torres Strait Islander story,’ Dr Trinca said.

It begins with one of the Museum’s treasures, Uta Uta Tjangala’s stunning work Yumari (1981). Other highlights include Vernon Ah Kee’s artwork Canchant (about 2010), a ‘surfboard’ depicting an image of his grandfather’s face, and the 1992 Renault Twingo car decorated with John Moriarty’s Balarinji Wunala Dreaming design, which Frenchman Jean Dulon drove on a 25,000-kilometre promotional tour of Australia in 1994.

The exhibition includes objects never before displayed at the Museum, including Queenie McKenzie’s painting Mistake Creek Massacre (1997) which references the 1915 incident in which eight Indigenous people were killed, a two-metre-high metal basket (2014) by Lorraine Connelly-Northey, and dialysis equipment from the remote Kintore community in the Western Desert.

Head of the Museum’s Indigenous Knowledges Curatorial Centre, Margo Neale, said: ‘Talking Blak to History provides a counterpoint to the white narrative that has dominated the national story for so long.

‘Talking Blak reveals feelings about attachment to Country. It tells stories of survival and resilience, overcoming the grief and loss brought about by colonisation through endurance, reconciliation and truth-telling.

‘The Indigenous voice speaks through quotation, in language and in English, in print and multimedia, peppered liberally with black humour,’ Ms Neale said.

Other poignant objects include a soft drink can modified for petrol sniffing, with an accompanying 1984 painting, Sad Boys Are Sniffing, by Vanessa Nampitjinpa Brown, and the large dressing gown given to John Kundereri Moriarty when he was a small child at St Francis House Children’s Home, Adelaide, in 1950.

Talking Blak to History is located in the lower First Australians gallery at the National Museum of Australia. Entry is free.