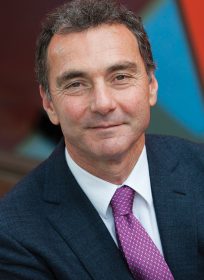 Dr Mathew Trinca, Director of the National Museum of Australia.

The National Museum of Australia’s director, Dr Mathew Trinca has been reappointed to lead the organisation for a second term.

Federal Minister for Communications and the Arts, Senator the Hon Mitch Fifield, has announced that Dr Trinca will head the National Museum in Canberra for another five years.

The news follows the release in the last few days of the National Museum’s Master Plan through to 2030.

Dr Trinca said it was an honour to accept the reappointment and thanked Senator Fifield and the Museum’s Council for their support.

‘It is an honour to be given the opportunity to continue the important work of telling the remarkable story of our nation, from the ancient and enduring histories of the world’s oldest living cultures to the making of contemporary Australia,’ said Dr Trinca.

‘I am excited by all that lies ahead with our plans to double the Museum’s display space and to bring even more of our national story to the Australian people. Ours is a big history and it deserves to be told in an involving, bold and comprehensive way.’

‘The National Museum is recognised for its award-winning exhibitions and programs and over the next five years we will continue our work to build a great audience-centred institution, to embrace emerging digital opportunities and to take the remarkable story of Australia to the world,’ he said.

‘The National Museum’s Council has full confidence that over the next five years, Dr Trinca and the team will take the organisation to even greater heights, in Canberra, nationally, internationally and digitally,’ said Mr Jones.

Dr Trinca has worked at the National Museum for more than a decade and has served as Director since February 2014.

Dr Trinca joined the National Museum as a senior curator in 2003, after working as a history curator and manager of the MuseumLink program at the Western Australian Museum, in Perth.

In 2006 Dr Trinca was appointed as the Museum’s Assistant Director, Collections, Content and Exhibitions. Dr Trinca has a PhD in history from the University of Sydney and is a graduate of the University of Western Australia. Dr Trinca is also the co-chair of the Australia-Singapore Arts Group and on the executive of the International Council of Museums (ICOM) Australia.