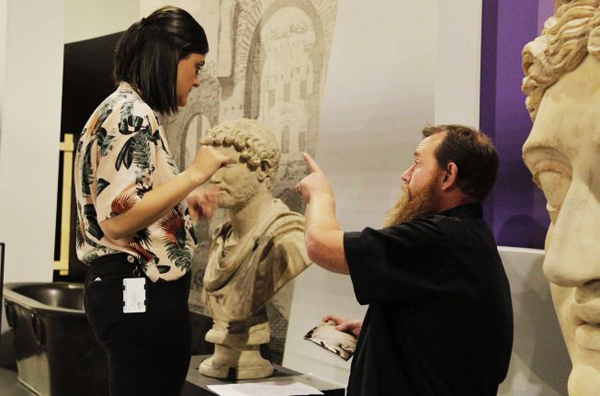 Stephanie Vasiliou (left) and Darrel Day were sent out with the artefacts from Britain. (ABC News: Franklin Hood).

The logistical feat of moving thousands of years and kilograms of precious ancient Roman history is complete, with the National Museum of Australia (NMA) about to lift the lid on one of its most expensive exhibitions.

In scenes reminiscent of Raiders of the Lost Ark, crates full of priceless ancient objects have sat in storage at the NMA in Canberra for the past three months.

Over the past week, Australian and British curators have been carefully unpacking container-loads of items, dusting off larger-than-life marble sculptures, paintings excavated from the ruins of Pompeii and an alabaster burial chest so finely carved that it is translucent.

The 200-plus treasures from the British Museum will make up the blockbuster exhibition, Rome: City + Empire, and the ABC was given rare behind-the-scenes access as the crates were broken open.

Just getting the objects to Canberra was an extraordinary exercise.

To say that these are fragile pieces is an understatement of biblical proportions.

The British Museum even sent out a specialist in the removal of heavy objects, Darrel Day, to coordinate the logistics for the bigger pieces — a towering 2.41-metre statue of a Roman magistrate and a massive marble head of Empress Faustina I, weighing a tonne and standing 1.7 metres tall.

“They all have different fragilities. They’re fragmentary in some cases, which means they’ve been put back together,” Mr Day said.

“They’re sometimes in antiquity, so you have to be careful of the joins, and that sometimes determines how you actually move them.

But he said the risks were outweighed by the thrill of handling such ancient works — albeit with kid gloves.

“It’s wonderful. Just to get near them is fantastic,” he said.

Some of the metal pieces are so delicate, they are housed behind climate-controlled glass with temperature and humidity carefully regulated.

For works that have, in some cases, lay buried for millennia, the last thing British conservators want is for their reputation, or their priceless relics, to be tarnished by a dry Antipodean climate.

British Museum conservator Stephanie Vasiliou is another who escorted the treasures to Canberra, and described her own Raiders of the Lost Ark moment, when she was stabilising a 2,000-year-old stone burial urn back in London.

“At one point as I was working on it, our studios had floor-to-ceiling windows, and the sunlight hit through the window and hit through the back of the alabaster object,” she said.

“It went translucent and all the gilding really showed up and the red pigment … it was just a beautiful moment and a very beautiful object.”

The alabaster cinerary urn, dating back to 100 BCE, is her favourite item to make the journey to Canberra.

For a generation of archaeologists inspired by Indiana Jones, it is enough to get the blood pumping.

The works span 1,500 years of arguably the most successful and romanticised cultures of all time.