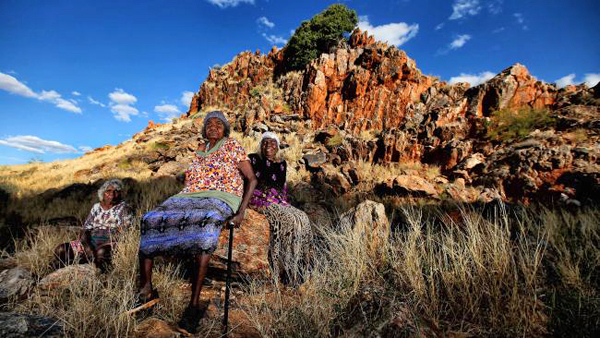 After a solid morning of painting in the shed at Parnngurr, Martumili art convener Carly Day offers to take painters Kumpaya Girgirba, Ngamaru Bidu and Ngalangka Nola Taylor for a drive. There is a short discussion in Martu before they tell Day they want to go to Yulpu, a shady freshwater soak. It lies near a deep red escarpment where Bidu and Girgirba remember being chased long ago by Aboriginal trackers who were rounding up desert people for the government.

The soak is about an hour’s bumpy drive along a narrow sandy track from Parnggurr, a tiny community that swells to 100 and shrinks to a handful of residents when they head out bush or to the nearest town of Newman, 370km away. The women travel in one car with Day while another follows behind with the men — the National Museum of Australia’s director Mat Trinca, The Australian’s photographer Colin Murty and the pilot, who has only seen this country from a cockpit and is curious.

The scrub is low with occasional trees along the way; at one stop, the women pull flowers from a yellow grevillea and hand them out, instructing the visitors to put the flowers, or wama, in their mouths and suck the nectar.

At Yulpu, Bidu and Girgirba walk together in the long grass and point out the escarpment where they once fled. The younger Taylor — whose strong command of English means she often acts as interpreter for the others — is reluctant to have her photograph taken here because this is not country in which she grew up.

Back in the car, the women decide to move on to Parnngurr Rockhole, another freshwater spot with orange and red-hued hills where government officials came to take photographs of nomadic Aboriginal families in the 1950s and 60s. The trio of artists gives permission to be photographed here. “This place is in the painting,” announces Girgirba, referring to the monumental work titled Yarrkalpa — Hunting Ground that they, with five other Martu women, created for the National Museum’s forthcoming exhibition Songlines: Tracking the Seven Sisters.

As they pose on the rocks, Girgirba starts to describe how the women divided the painting into sections. “We all sat down and said, ‘You do this and I do this’,” she says.

In one corner of the painting is a series of seven spherical forms. They are the Seven Sisters, or Minyipuru, the mythical spirits the women see in the night sky whenever they roll out swags and sleep out. Stargazers around the world would call the clusters the Pleiades and Orion constellations, but these are not names Bidu, Taylor or Girgirba would use. They have a different name — and a constellation of stories to match — about the seven spirit beings that were pursued by a lustful man, Yurla, across the creation landscape.

“Soaring together across the night sky, chased relentlessly by the priapic old man, the Minyipuru leave their traces everywhere,” writes essayist Kim Mahood in the Songlines catalogue. “As the Minyipuru dance, run and fly across the Martu landscape, zigzagging from waterhole to rock hole, fleeing Yurla, sometimes outwitting him, sometimes falling victim to him, they map the waterholes and mark the country, creating landmarks and enacting ­ceremonies weaving a picaresque tale that is menacing and hilarious, cheeky, violent, transcendent — and above all memorable.”

As female custodians, the three Martu women live in intimate proximity — physical and spiritual — to their part of the Seven Sisters songline. With others, the women have patiently explained how the Minyipuru spirits set out eastward from Roebourne, near the West Australian coast, and travelled for hundreds of kilometres, leaving a trail of rocks, waterholes and other features in the land. After reaching their final Martu placename at Pangkapini, the sisters moved on through different country with other languages to become part of someone else’s Dreaming, or Tjukurpa. “Seven Sisters is not just one songline — they travelled all around Australia,” Girgirba and Taylor explain.