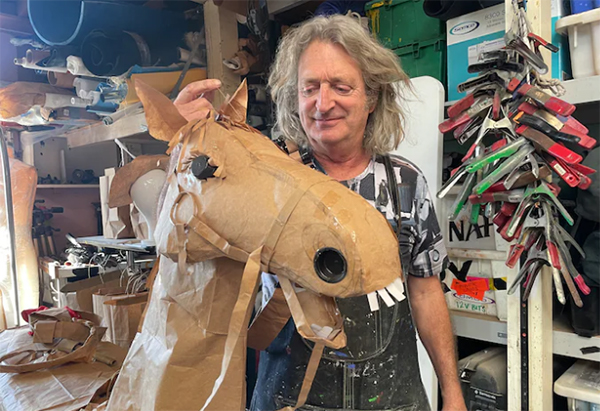 SYDNEY — The National Museum of Australia houses hundreds of years of the country’s history, from Aboriginal artifacts to Capt. James Cook’s navigational instruments.

Soon, the sprawling institution on the edge of a lake in central Canberra will get a new addition: a paper horse named Russell.

The nearly life-size stallion became a national — neigh, international — sensation this year when David Marriott pieced him together while in hotel quarantine. The 58-year-old also created an alter ego, known as the Quarantine Cowboy, whose adventures with the horse were an online hit.

Now Russell is going on one last gallop — into the museum’s permanent collection. The museum confirmed the acquisition but declined to comment publicly.

It’s a sunset ending to a saga that nearly stopped abruptly four months ago.

“I was going to leave him in the hotel room to freak out the cleaners,” said Marriott, who has the wild eyes and tousled mane of a mad scientist. Instead, colleagues persuaded him to keep his creation.

“He’s just taped together out of bags,” he said of his brown paper bronco. “But there’s something about his face, his expression. He has a lot of fans.”

Around the world, museums are trying to collect art and ephemera that capture people’s pandemic experiences. In Australia, where the pursuit of “covid zero” has forced more than 300,000 people to endure two-week stints in hotel isolation, Marriott’s whimsical quarantine escapades struck a chord.

Like many pandemic stories, however, the tale of the paper horse is also one of distance, frustration and loss. 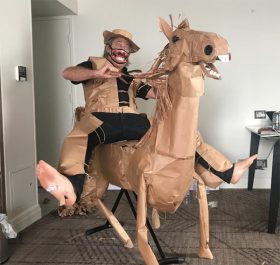 Marriott poses atop the horse he built out of an ironing board, a lamp and paper bags while in hotel quarantine. (David Marriott).

Marriott grew up near London, a long-haired rebel who, to go surfing, often drove five hours in an old van on which he’d painted a giant fried egg.

“He’s always been very creative and slightly off the wall,” said one of his two older sisters, Lyndsey Marriott.

Their father, Harry, was a strait-laced BBC employee who sometimes struggled to understand his free-spirited son.

Marriott moved to Sydney in his mid-20s and channeled his creativity into a career-making sets and props for films, TV shows and commercials.

When the pandemic began, Marriott could only watch from afar as England was hit. His father, in his 90s and retired, was careful not to come into contact with the virus.

But in late January, just as cases were surging, Harry shattered his hip and had to have surgery. A week later, he tested positive for the coronavirus.

David sent him texts filled with jokes and teenage confessions. But when they FaceTimed, his father was delirious. Doctors said to fear the worst.

Marriott applied for an exemption to Australia’s travel ban, which bars citizens from leaving and is one of the strictest in any democracy.

“It was a blanket ‘no,’ ” he said. Marriott reapplied with a letter from the hospital saying his dad probably wouldn’t make it.

“I got the exemption,” Marriott recalled. “I think that was on Sunday, and on Monday morning, he died.”

Marriott arrived in London in time for the funeral, and tried to comfort his mother. His month in locked-down England was “so cold and gray and depressing” that he felt relieved when his return flight landed in Brisbane on March 27 and members of Australia’s armed forces led him to a hotel room with a balcony.

The idea that would briefly make him famous came — like everything else in quarantine — with a knock on his hotel room door.

In the corridor, he found a brown paper bag containing his lunch. But in the poke bowl Marriott saw something else — possibility. He pulled out his art kit, including a small pair of scissors and tape.

“The brown paper cowboy is coming,” he wrote on Facebook, next to a photo of him wearing the bowl and bag transformed into a cowboy hat. 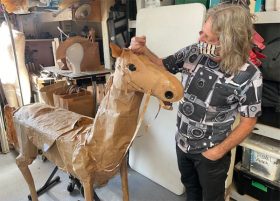 Marriott’s creation will go into the permanent collection at the National Museum of Australia. (Michael Miller/The Washington Post)

Marriott found he had almost endless materials, as each meal arrived in the stiff paper bags. The hotel wasn’t recycling any of it because of covid concerns, so he made himself a paper revolver and then a vest and chaps, complete with western fringe.

“The days are so long in quarantine,” he recalled. “But as soon as I started cutting things out and playing with the cardboard bags, the time started flying.”

What he really needed, he soon decided, was company. He googled “horse head” and began drawing an outline. Then he unplugged a desk lamp and put it atop an ironing board for the body. Finally, he turned used coffee pods into eyes and nostrils.

“Meet Russell, the perfect trusty steed for the brown paper cowboy,” he wrote on Facebook with a photo of himself in full costume next to the horse. “Armed with a small roll of sellotape and a pair of scissors, anything is possible.”

The photos garnered a huge response after he posted them to a Facebook page for Australians in quarantine that had more than 20,000 members. A local radio station asked him for an interview, then national TV programs began calling. He even gave an interview to his dad’s old employer, the BBC, in an American cowboy accent.

But even as he gained fame, Marriott’s barometer for success remained his mother. Every morning, she would wake up and be hit by grief, Lyndsey recalled. Then, one evening, David FaceTimed from quarantine to say he had made a horse.

His mother burst out laughing.

“It was an amazing moment,” Lyndsey said. “We all thought he was completely bonkers, but she was proud of him.”

It became an evening ritual.

“He wasn’t doing it to become an Internet sensation,” Lyndsey said. “He was doing it to amuse himself and my mom.”

Marriott gave his recyclable hero a nemesis named the Cling Film Kid, made of single-use plastics. And he spent his second week of quarantine making short videos that culminated in a ketchup-splattered showdown.

The videos made him feel closer to his father, who had lent him a Super 8 camera as a kid. Marriott had taken a few of his dad’s possessions, including an old sewing kit. One of the threads happened to match Russell’s skin, so Marriott used it to make the horse appear to talk. 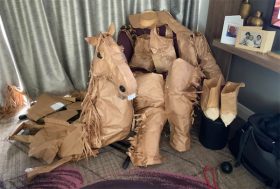 On his last day in quarantine, Marriott had planned to leave Russell’s head in his hotel bed as a homage to “The Godfather.” Instead, at his colleagues’ urging, he packed up most of the pieces, leaving behind the lamp and ironing board — slightly bent from his riding Russell. When he carried the horse’s head with him on his flight from Brisbane to Sydney, the attendants made Russell go in overhead storage.

“He got a bit crumpled,” Marriott said on a recent afternoon in his Sydney studio, where Russell stood, reassembled, in the corner, watching his creator turn giant metal gears into floor lamps. The walls were lined with surfboards and stage props, including supersized foam french fries and a fake human skull covered in faux diamonds.

With Sydney in months-long lockdown amid an outbreak of the delta variant, Marriott’s adventures now show millions how to stay sane while cooped up.

A silver lining of the lockdown is that Marriott has had more time with Russell, to whom he still talks as he did in quarantine. Soon, the museum will send couriers to carefully pack up the artwork and take it to Canberra.

“I’m going to miss him,” Marriott said, as he made Russell’s bucktoothed mouth flap open and shut. So much, in fact, that he’d begun to entertain a blasphemous thought.

“I might make another one,” Marriott said, smiling as he pretended to feed his face mask to the horse.