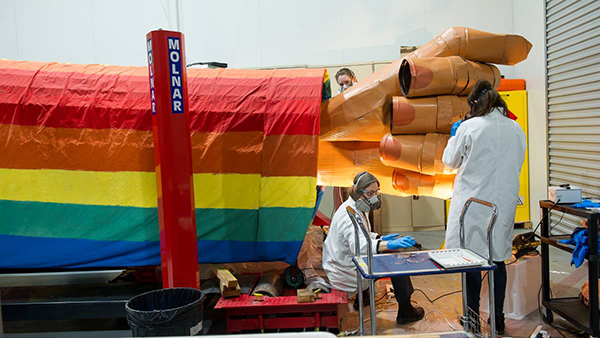 Handmade from 20-litre oil drums and metal swimming pool walls scavenged from the Mugga Lane tip, then liberally coated with orange paint, a giant fist with a curious place in Canberra’s protest history is poised to make its first public showing in almost 30 years.

Bizarrely, back at the height of two fierce anti-war protests in the national capital, first in 1989 and again in 1991, the rainbow-clad forearm behind the fist contained nine naked men – the “Penises for Peace” – who hid inside in an attempt to disrupt a controversial arms trade fair.

The naked men hid inside the forearm as it rushed the gates of Exhibition Park, intending to break through and release the Penises for Peace.

But police foiled the cunning Trojan horse plan by diverting the fist at the gates and overturning it. The naked men, with slogans daubed on their bodies, spilled out and were arrested.

The Exhibition Park arms trade fair was an intense focus of attention for thousand of demonstrators and sparked demonstrations in all capital cities, but none larger and more emotionally charged than in Canberra.

Protesters travelled from across the country to join in, with the Renegade Activist Action Force, loosely aligned with several other peace groups, providing the co-ordination. 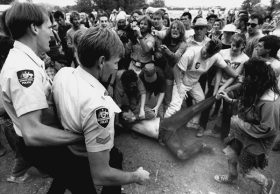 Police and protesters in a violent scuffle outside the entrance to the Aidex arms shows in November 1991. Picture: Peter Morris.

Media coverage of the fierce clashes between the police and protesters, together with the colourful float and a bright red “Stop Arms for Export” sign held in its fist, reverberated around the country.

The giant float, built on a frame with rollers and pushed along from the inside like a shopping trolley, became a common sight in the national capital during the protests, journeying from Canberra city to Parliament House, and all the way up Northbourne Avenue to the picket line on Flemington Road.

It was there amid the push and shove with police, the raucous chanting, the marches, the nudity and the many arrests, with more than 60 people taken into custody at various times.

Finally, during a scuffle at the 1991 protests, the float was seized by police and impounded, incurring some damage during the argy-bargy.

And there it sat, forlorn and unloved, until the National Museum of Australia took an interest in adding it to its collection.

It underwent a partial restoration shortly after the museum acquired it in 1992 but now, many years later, it has been hauled out of storage and given a full preparation in readiness for becoming the largest and most colourful exhibit that has ever eased its way into the Canberra Museum and Art Gallery.

The float is so big, in fact, that the front doors of the gallery on London Circuit will need to be removed to squeeze it inside.

“Being such a large piece it’s not an easy thing to move around, so it’s great to finally see it out on loan after so long,” museum conservator Nicki Smith said.

“It is quite a visually striking object and we think people will be taken by it, and the story which goes with it”.

People pushing from inside can’t see where they are going so the float requires two “sighters” to provide steering directions, which shows just how determined those activists were as they trundled it around Canberra’s busiest streets all those years ago.

The float will be the centrepiece of the Activism: Forces for change in Canberra exhibition, which opens to the public on July 13. Also included will be stories and pictures from the many protests, from land rights to marriage equality, which have shaken the national capital down through the years.