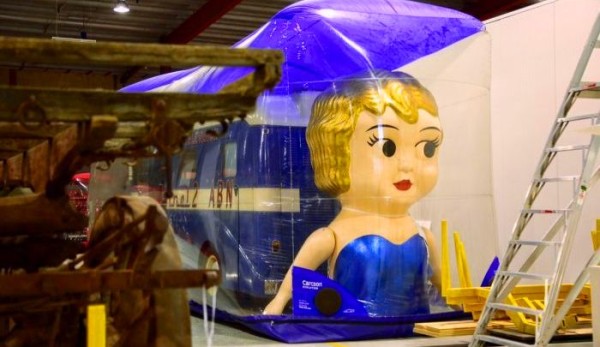 Betty, one of the 12 giant kewpie dolls from the closing ceremony of the Sydney 2000 Olympic Games.  Source: ABC News.  Photo: Greg Nelson.

The National Museum of Australia‘s official collection is constantly growing, but the majority of its items might never go on public display.

Instead, behind the scenes, staff are working hard to conserve and carefully store the collection, making it more accessible online.

“Obviously we can only ever have a small proportion of our collection on display,” senior curator Sophie Jensen said.

“We have the ability to display 4 or 5 per cent of the collection at any given time.”

The rest of the treasures are carefully preserved and stored at repositories in the Canberra suburb of Mitchell.

“We get a lot of offers of donations from the public which is wonderful,” Ms Jensen said.

“We also do a lot of active purchasing. You get large collections, small collections, it’s a huge diversity.”

Many of the items are familiar to Australians, like the original set and props from the long-running children’s program Play School.

In particular, the Rocket Clock and shaped windows proved popular.

“The response from people to Play School is quite overwhelming. You have now generations of Australians that have grown up with this particular program,” Ms Jensen said.

But she said the items could be going on display temporarily to mark the 50th anniversary of Play School next year.

The Holden Torana driven Michael and Lindy Chamberlain on that fateful holiday to Uluru with baby Azaria was a more recent acquisition.

“This car played a really central role in the case because it was used for forensic testing when Lindy was eventually tried for Azaria’s murder,” Ms Jensen said.

The forensic testing led to Lindy Chamberlain’s conviction and was later crucial in clearing her name.

Senior curator Daniel Oakman said he was particularly excited by the recent acquisition of three highly sought after giant clam shells, seized from illegal fishermen in waters off northern Australia.

“They’re so rare it’s such a rare opportunity for a museum like us to get hold of these specimens,” Mr Oakman said.

Aboriginal communities are invited regularly to view the 90,000 Indigenous items in storage and researchers can also access the collection.

Meanwhile museum staff are working hard to make as much of the collection as possible available to the public online.

“We’re adding to it all the time,” Ms Jensen said.

“We’re putting on more and more objects from our collection and people therefore then are able to have a good look at the objects themselves.

“We need people to be able to come and view these items … it’s not like sticking things away in a cupboard. This is actually an active and working part of the museum.”