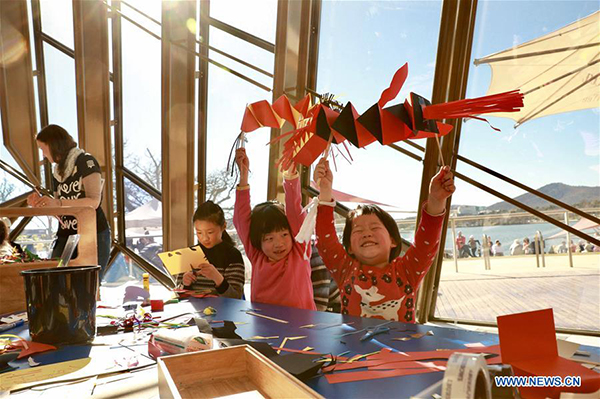 Children take part in the Chinese Festival Day event at the National Museum of Australia in Canberra, Australia, July 21, 2019. As children and their parents were making paper dragons or lions, some seniors sat down to enjoy Chinese dances and songs in the National Museum of Australia on Sunday, when the Chinese Festival Day attracted thousands of visitors. (Photo by Chu Chen/Xinhua).

CANBERRA, July 21 (Xinhua) — As children and their parents were making paper dragons or lions, some seniors sat down to enjoy Chinese dances and songs in the National Museum of Australia on Sunday, when the Chinese Festival Day attracted thousands of visitors.

The event lasted for three hours from 10 a.m. local time. It was a specially-designed family festival day along with the “Historical Expression of Chinese Art” exhibition, which started on April 5.

“This event will complement the static painting and calligraphy exhibition in a dynamic form, and you will experience a more comprehensive and multi-faceted Chinese culture,” said Yang Zhi, minister-counselor for culture at the Chinese Embassy in Australia.

He told Xinhua that the museum proposed to have such an event so as to help more people understand Chinese culture. The exhibition has attracted more than 56,000 visitors to date.

“This ‘Chinese Festival Day’ is testament not only to the fruitful cultural exchanges between China and Australia, but also to long-term friendly and mutual trust between the two sides,” he said.

Heidi Pritchard, manager of lifelong learning at the museum, said that the festival promotes understanding and harmony. “And it is good fun,” she said. “Everybody is having fun. They are watching the dance. They can have tea. Most importantly, they speak to people. They get really interactive.”

When they were tired, they could take a sip of tea at the tea ceremony, or sit down to learn making dumpling.

The performers and demonstrators were mostly from local Chinese communities.

“Local people are interested,” she said. “Some of the children are Chinese Australian, who had little chance here to learn Chinese culture. So the event helps them better understand the tradition where their parents were from. Some are Australian kids, who would find the demonstration intriguing. Some of them asked the teachers to write down their Chinese names, or make a painting for them.”