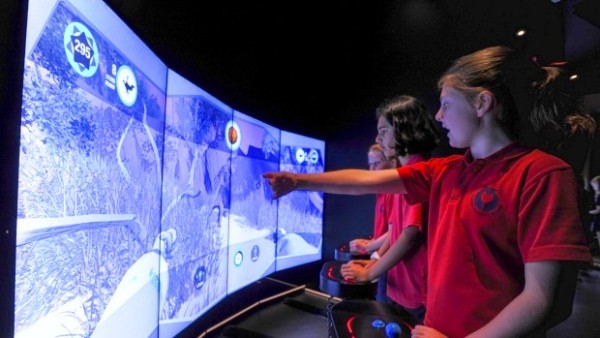 Technology has become the core of most education.

But for the first time, children visiting the National Museum of Australia can make their own ‘time-travelling robots’ and explore a mystery place from Australia’s history.

Teams use giant touch screens to build their robots with a photo of themselves, then blast back to one of eight scenes.

It could be back to the 1930s, when the Sydney Harbour Bridge was being built, or to the Victorian goldfields in 1854, or even back to when dinosaurs roamed the lands.

They then have to work together to complete a mission, before they learn about the scene they had visited and send home a postcard.

Project manager and executive producer Karina West said the experience is an upgrade of the museum’s old Kspace 1.0, which was entertaining but not quite educational.

“What we really wanted to do with this new facility for kids was to make that balance between talking about Australian history and it being fun really strong,” she said.