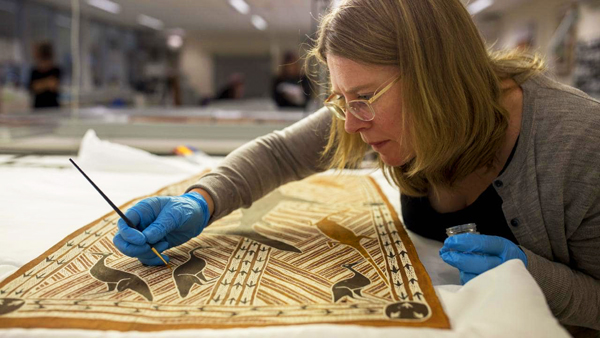 National Museum of Australia conservator Prue Castles inspects a 1967 bark painting before it is packed for the history-making tour to China. Picture: Sean Davey.

A history-making exhibition of Aboriginal bark paintings and ­objects from Arnhem Land — most of which have never left Australia — will soon tour mainland China and Taiwan, in what is being hailed as a “cultural diplomacy milestone’’.

First stop on the 20-month tour, to be officially announced in China today, is the National ­Museum of China at Beijing’s Tiananmen Square and the world’s second most visited ­museum in 2017, after the Louvre.

Titled Old Masters, the barks show will open on July 3 for a two-month outing, before touring to flagship museums in Shanghai, Chengdu, Shenzhen and Taiwan. The works come from the Nat­ional Museum of Australia in Canberra, which has the world’s biggest and richest collection of ­indigenous barks.

Australia’s ambassador to China, Jan Adams, said: “The ­exhibition represents the most significant collection of Aboriginal bark paintings to leave our shores for China. The Australian government, through the Australia-China Council, is proud to support this important cultural diplomacy milestone.’’

The exhibition comprises 154 works, everything from X-ray-style kangaroo paintings to images of the afterlife, and can be seen as a feat of cultural diplomacy at a time of security-related tensions in the China-Australia relationship. National Museum of Australia ­director Mat Trinca said the tour was an “epic” undertaking, “six years in the making”.

Old Masters is adapted from a 2013 show of the same name that was mounted at the NMA. Dr Trinca said “this delicate and beautiful collection of ­Arnhem Land bark paintings is one of Australia’s great cultural treasures, and the NMA is ­delighted to share them with Chinese audiences”.

Bark paintings are notoriously fragile, as they absorb moisture and can develop cracks over time. NMA conservators, including Prue Castles, have spent more than 1000 hours preparing the paintings for the marathon tour.

This work is painstaking — armed with torches and industrial-sized microscopes, conservators will often spend an entire day ­examining a single painting.

Among the painters featured are David Malangi (1927-99), who used to joke he was Australia’s most popular painter because one of his images was reproduced on the now-­defunct $1 note.

Another old master, Mathaman Marika, who died in 1970, played a central role in the fight against bauxite mining in the Yirrkala region of Arnhem Land.