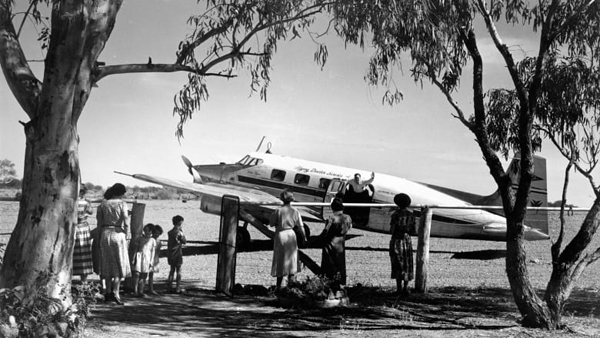 Flying Doctor being greeted by a group of waiting women and children. Photo: State Library of Queensland

Serena Coady, The flying doctors land at the national museum, The Age, 20 August 2018

Can you imagine having to punch out morse code and pedal vigorously to get medical help?

In the early days of the flying doctors, which is now in its 90th year, rural Australians would have to use pedal-operated radio transmission in a “pedal and puff session” during emergency situations. It’s one of a series of objects on display as part of a new exhibit at the National Museum of Australia.

“The ‘pedal and puff’ anecdote really gives you a sense of the physicality of the object,” the curator of the exhibition Dr Lana Hall said.

“The reason they developed the pedals is so you could have your hands free to work the dials on the transceiver and send a morse code message, as they didn’t have voice transmission.”

“The pedal generator is a key object in terms of the development of technology and ingenuity.

“It’s odd-looking. One might think, ‘What on earth is that for?’ Apparently, it was quite hard to pedal. It’s not like riding a bike in first gear, it’s like riding it in third or higher.”

The new exhibit also includes a homestead radio transceiver, a 1960s medical chest and a propeller blade from an old flying doctors plane. Even a 1980s flying doctors board game found at secondhand sale.

An audiovisual element, which displays current-day interviews with a flying doctors patient who nearly died in a farming accident plus an interview with a Charleville-based flying doctors pilot, adds a modern touch to the historical pieces.

Before this, the National Museum didn’t have any items related to the flying doctors, so this has been a unique opportunity for the museum, Dr Hall says. She hopes it will provide a “step back in time” for viewers to “see how innovative the service was when it started in 1928.”

“The use of technology at that time – both radio, medicine and aviation – was forward-thinking. Those three core elements have evolved from the beginning, and are still core to the service today.”

One thing which has certainly changed for the flying doctors are the numbers. They’ve grown from a single-leased Qantas plane in 1928 to being Australia’s third largest airline with a fleet of 69 planes.

“We’re marking 90 years of providing healthcare to remote Australians. 90 years ago, we were the first organisation anywhere in the world to use aircraft to fly in doctors for emergencies, and bring the injured or ill to the cities. City people take that for granted,” flying doctors chief executive Martin Laverty said.

While Dr Laverty regards flying as crucial to operations, he says having staff on the ground is key.

“This is why we rely on Telehealth so much. And we need more doctors, nurses and specialists serving in the bush.”

During a call, the base will determine whether an aircraft is dispatched. They also use video conferencing when available, but if you’ve tried and failed with Skype/Facetime (even in city areas) you’d understand just how tricky this technology can be in country Australia.

Dr Laverty, who also has a personal connection to flying doctors, is keen to bridge this gap.

“This connection between city and bush is the reason I’m at the Flying Doctors. People in the city support people in the bush with resources and access to the services they need. Bridging that gap is the reason I go to work each day.”

The Royal Flying Doctor Service’s exhibit is on at the National Museum of Australia indefinitely and can be found in the Landmarks gallery.