You are here: Home » Articles filed under: 'News' » Article: 'NMA’s Olympic year to include BM exhibition'

Canberra may be one of the world’s younger cities, but we sure do love immersing ourselves in displays of ancient things.

The National Museum will be bringing another crowd-pleaser to the capital next year with a major exhibition of artefacts from ancient Greece, capping off a series of shows from the British Museum.

In keeping with the Olympic theme of 2020, Ancient Greeks: Athletes, Warriors and Heroes will feature 170 objects exploring the theme of competition through sports, politics, drama, music and warfare. 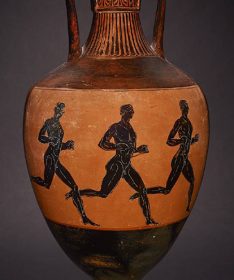 This piece of pottery from Athens, dating back to 333BC, will be on show at the National Museum of Australia in 2020. Picture: Supplied.

It’s the fourth in a series of British exhibitions that have travelled to Canberra, following Rome: City and Empire last year, A History of the World in 100 Objects in 2016 and Encounters: Revealing Stories of Aboriginal and Torres Strait Islander Objects from the British Museum in 2015.

National Museum director Mathew Trinca said many of the works in this show had never travelled to the southern hemisphere.

“I think it would be fair to say that the British Museum places particular store on its ongoing relationship with the National Museum,” he said

“Hartwig Fischer, their director, and I enjoy a great relationship and a great belief in the strength of these kinds of collaborations and partnerships.”

He said among the standout objects would be a marble study of one of one of the best-known Greek athletic statues, Dior Dionis, a bust of the playwright Euripides, and a terracotta vase with finely drawn depictions of athletes.

Mr Trinca said the vase was been the ancient equivalent of today’s Olympic gold medal.

“This would have been filled with olive oil and given to the victor of the Athenian Games as a prize, and it dates from the 4th century BC,” he said.

“There’s a terrific terracotta sculpture of two women playing a game of knuckle-bones as well, and that’s amazing when you think that’s a game I played as a kid.”

He said it was important to have been able to bring the works here during the Olympic year.

“It’s particularly nice to imagine that we reflect on the history of what is now the most compelling display of athletic prowess that we know in our world,” he said.

“It of course has its own history dating back to 1896 and the revival of a concept of an idea that reaches right back to ancient Greece.”

The works will be in Canberra at the same time as another series of masterpieces from a different era – by European masters, including Van Gogh’s Sunflowers and self-portrait by Rembrandt – would be showing across the lake at the National Gallery of Australia.

“How good is that? When you think about these two shows, driving visitors to Canberra over the summer, it’s particularly exciting,” Mr Trinca said.

“I’m excited about the way that we continue to raise the bar for what this city offers through its cultural life to people who come both to our shores but also from around Australia to visit Canberra.

“I don’t think we are saying enough about it in the city, that this is now a great cultural destination.

“I think there’s a way that the city has got to really start to internalise this, understand itself, be prepared to market itself differently based on the fact that year in, year out, it’s got shows like this coming.”

Ancient Greeks: Athletes, Warriors and Heroes will open at the National Museum of Australia in December 2020.