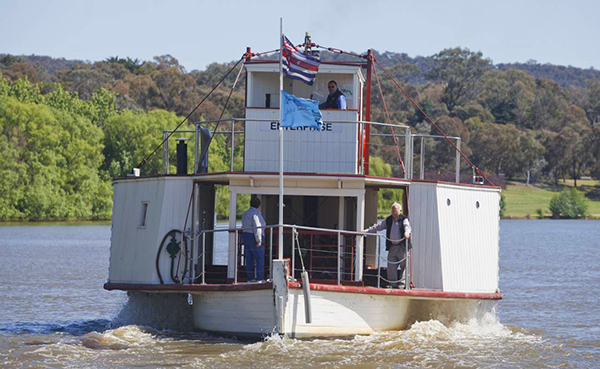 The paddle steamer Enterprise is one of the National Museum of Australia’s most important objects, The Canberra Times, 13 April 2020

As you glance in a westerly direction from the Commonwealth Bridge, the dramatic architecture of the National Museum of Australia looms large. But if you drop your gaze to the shoreline, you’ll see a white vessel moored to a jetty close to the main building.

Against the museum’s radical, post-modernist sweep, this little boat is almost unnoticeable, and yet it is one of the museum’s most significant historical objects. It is the Paddle Steamer Enterprise.

Paddle steamers were key to a pivotal change that took place in the interior of eastern Australia in the 19th century with the expansion of wool production. In 1797 the first merino sheep arrived in Australia and 16 years later the first commercial wool consignment was shipped to London. From that point the wool industry took off.

However, the immense tracts of land required to run sheep meant there was an ever-increasing demand for fresh pasture and by the middle of the 19th century the industry was running out of acreage. The vast interior of New South Wales, Victoria and southern Queensland held thousands of square kilometres of productive land but the distance to markets made much of it economically unviable.

In 1850, the government of South Australia recognised the potential of transport on the Murray-Darling river system and offered a reward of ‘£4,000 to be equally divided between the first two iron steamers of not less than 40 horsepower, and not exceeding two feet draft of water when loaded, as shall successfully navigate the waters of the River Murray to the junction of the Darling’.

The first paddle steamer on the Murray was the Mary Ann. The frame of the Mary Ann was built by the Randell brothers in Gumeracha, South Australia, and then transported, finished and launched at Noa-No near Mannum, in February 1853. It wasn’t until August of that year that it began its maiden voyage upriver.

At the same time, Captain Francis Cadell had negotiated directly with the colonial government to pilot a vessel through the Murray mouth and further upriver. Cadell’s paddle steamer was constructed by the Thomas Chowne shipyards in Pyrmont, Sydney. Aware of the politics of his venture, he named it Lady Augusta after the wife of the South Australian governor.

Lady Augusta sailed south from Sydney and through the Murray mouth in August 1853. The race for the Darling was on. By 14 September, just beyond the Murrumbidgee junction, Lady Augusta passed the Mary Ann and Cadell reached Swan Hill on 17 September, four hours before Randell. The race proved that river trade was possible and this signalled a seismic shift in the Australian economy. The middle of the 19th century had been dominated by the gold rushes but as the century wore on more and more of the nation came to be riding on the ‘sheep’s back’.

In the late 19th century, the Australian colonial economies were some of the strongest in the world, and the states of South Australia, Victoria and New South Wales were seen as world leaders in progressive social policies.

The opening up of the Murray River, however, increased interaction and tension between the settlers and Indigenous people in the basin. The Murray had been home to at least 20 different Aboriginal nations but the influx of land-hungry colonists bringing with them a range of diseases for which Indigenous people had no immunity resulted in tens of thousands of deaths.

Over nearly 150 years of service, the Enterprise has worked as a cargo ship, floating store, fishing vessel and houseboat. It is one of the oldest functioning paddle steamers in the world.

The PS Enterprise was built at the height of the Murray-Darling river trade in 1876 by the timber merchant William Keir at Echuca on the Murray. Like most of the Murray paddle steamers of the time it was constructed of river red gum, in this case sourced from the great Barmah forest.

The Enterprise is still powered by the original, single expansion, twin-cylinder 12-horsepower engine made by Beverley Iron Co. in England. A shallow draft hull made it suitable for dealing with the river system’s wildly varying water levels. Over nearly 150 years of service, the Enterprise has worked as a cargo ship, floating store, fishing vessel and houseboat. It is one of the oldest functioning paddle steamers in the world.

The PS Enterprise was the first significant object purchased, in 1984, for the Museum by founding director Dr Don McMichael. At the time the government was deep in debate about funding a display space for the National Historical Collection and McMichael decided, in order to forward the case, that a dramatic, engaging object that told a comprehensive story about Australia in a multi-sensory way was needed. The PS Enterprise fulfilled that role. After a full refit in Echuca, the Enterprise was launched in Lake Burley Griffin in time for the Bicentenary celebrations of 1988.

The PS Enterprise continues to be one of the National Museum of Australia’s most important objects, looked after by a crew of dedicated volunteers and the museum’s professional conservation staff.

Although the museum’s doors are temporarily closed, staff are working behind the scenes to keep bringing Australia’s remarkable stories to you online. There’s something for kids and adults with videos, interactives and audio on demand.

Visit nma.gov.au for details about other objects and exhibition.