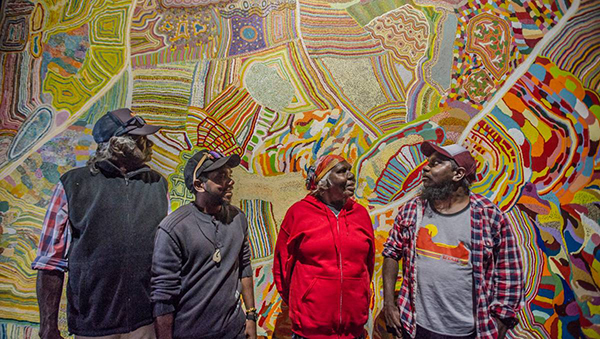 For Australians, it was less a revelation than a celebration of First Nations culture.

When Songlines: Tracking the Seven Sisters opened at the National Museum of Australia in 2017, it was an instant hit – a ground-breaking exhibition that told one of the great Indigenous travel stories.

By the time it closed in 2018 after a six-month run in Canberra, 400,000 visitors had been through to soak up the experience, many leaving with a newfound appreciation for the visual and story-telling culture of Indigenous Australia.

And now, four years and one continuing global pandemic later, the same award-winning show has just wrapped up a similarly striking season in, of all places, the English seaside city of Plymouth – the same port, incidentally, from which Captain James Cook first set sail in 1758 in search of Terra Australis.

For the past few months, word-of-mouth has compelled almost 30,000 visitors onto the three-hour train journey south-west from London to take in Songlines at The Box in Plymouth.

And the reviews have been glowing, many hailing the show as an epic triumph of storytelling and innovation. 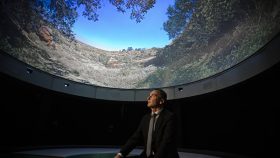 “Transformative”, “a revelation”, and a major shift in focus on the world’s oldest continuing culture – the show is so beautiful and striking that it’s continued success shouldn’t be a surprise.

Instead of a static collection of beautiful objects – the kind of show most of us were used to – more than 100 artists present the Seven Sisters’ journey across the deserts as a living tradition, using traditional artworks and high-tech innovations.

Among them is a huge, immersive digital dome featuring rarely seen rock art depicting the Seven Sisters activities at the remote Cave Hill site in South Australia, as well as animated artworks and the transit of Orion constellation and the Pleiades star cluster.

It’s also, it must be said, a Canberra success story. 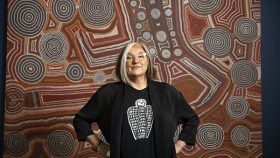 The impetus for the show was a 2010 plea from the elders of the Martu, Ngaanyatjarra and Anangu, Pitjantjatjara and Yankunytjatjara people, to save their songlines .

Their grandchildren were too wrapped up in social media, and no longer had any interest in their own foundation stories.

They approached the museum and the Australian National University for help.

“You mob gotta help us,” said Anangu elder David Miller. “Those songlines, they been all broken up … you can help us put them back together again.”

A songline, or dreaming track, traces the journey of ancestral spirits as they created the land, animals, and lore.

The exhibition tells the story of the seven sisters who traversed the nation from west to east to escape their lustful suitor, and showcases sections of five indigenous Western Desert songlines.

The Canberra Times art reviewer Sasha Grishin wrote at the time that Songlines set a new benchmark in presenting Aboriginal art in a museum exhibition.

“It acknowledges the responsibility that Australian museums have to preserve, explain and celebrate Indigenous culture,” he said.

“It is a bold and beautiful exhibition where the Indigenous voice is loud and clearly articulated and not drowned out by those of anthropologists and antiquated museum practices.”

And British visitors, once it opened in Plymouth, couldn’t get enough of it either.

The Box chief executive Victoria Pomery said Songlines had “captured the imagination of thousands of visitors and sparked a really emotional reaction from people young and old.

“We’ve been delighted by the positive response to the show from our audiences, many of whom travelled significant distances to see it.”

The show has now been packed up and is on its way to Humboldt Forum in Berlin, where word has already spread that it’s a must-see show. After that, it will be onto the Musée du Quai in Paris.

It’s a long and winding journey from the meeting rooms of the museum here in Canberra, where the show’s curator Margo Neale first sat down with elders to talk about ways to save their stories for future generations.

But for her, a proud Gumbaynggirr woman, there’s no real mystery to the show’s enduring success, especially for those relatively unfamiliar with Australia’s Indigenous storytelling traditions.

Apart from the fact that the story has all the elements of a great adventure – high drama, magic and comedy – it also tells of female solidarity as the sisters are chased by a shape-shifting sorcerer.

“It’s a precursor to the #MeToo movement!” Professor Neale said.

But it was also a masterclass in how to put together a show in the most collaborative sense.

As Professor Grishin wrote at the time: “It is also an exhibition in which the Indigenous voice is not drowned out by that of anthropologists who, frequently with the authority of colonial overlords, examine empirically the activities of exotic peoples.”

Professor Neale, who oversaw the installation of the show in Plymouth via Zoom last year when Covid restrictions prevented anyone from travelling – said it had been important to set up what she called a “curatoriate” – said it helped that the show is a celebration of Indigenous culture, rather than something that, she said, invariably turned into “a guilt-trip” about the oppression or appropriation of indigenous voices.

“It’s continuous – it’s a sort of a receptacle for ancient wisdom and knowledges. But it’s also a portal to the present, and the places and the issues of today,” she said.