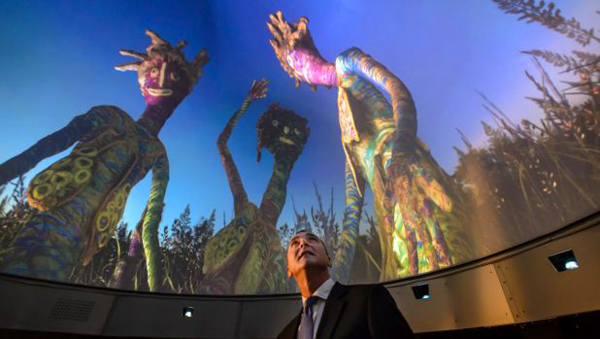 Ancient stories from one of the oldest cultures will be told with the latest technology when a ground breaking exhibition opens at the National Museum of Australia.

An immersive multimedia DomeLab experience is at the heart of Songlines: Tracking the Seven Sisters, an epic story exploring ancient indigenous songlines.

The exhibition opens on September 15, telling the story of the sisters who traversed the nation from west to east to escape their lustful suitor.

A songline, or dreaming track, traces the journey of ancestral spirits as they created the land, animals, and lore.

The Canberra Times had an exclusive sneak peek at DomeLab, the world’s highest-resolution travelling dome. You enter the dark space, lie down to view the two short multimedia experiences which unfold on the six-metre wide dome above you. It feels as though you are under the night sky, or in a cave, part of the story, transported to another world.

Entitled Travelling Kungkarangkalpa, it features rarely seen rock art depicting the Seven Sisters activities at the remote Cave Hill site in South Australia. It also features animated art works including 3D tjanpi (grass) figures of the Seven Sisters soaring through the skies, and the transit of the Orion constellation and the Pleiades star cluster.

DomeLab was conceived and developed in 2015 by Professor Sarah Kenderdine in collaboration with the National Museum and 10 other organisations, as part of an Australian Research Council grant.

Professor Kenderdine said DomeLab challenges groups of some 30 people at a time to see things differently and transports them into other worlds.

“Travelling Kungkarangkalpa is a digital sanctuary that simultaneously expresses the sphere of the world around us, the sky above and the ground below, enveloping viewers in depictions of the Seven Sisters as they travel through country,” said Professor Kenderdine.

“Visitors can stand, lie or sit beneath the suspended Dome and experience senses similar to camping in the desert, gazing up into the night sky.”

NMA director Mathew Trinca said DomeLab gave audiences something not on offer before in Canberra.

“It’s easy for museum directors to say that every show they’re doing is one of the most important shows their institution has ever done but I do think in Songlines we’re making work that is not only for today but also for the future,” he said.

The museum’s senior indigenous curator Margo Neale said Songlines was an exploration of how communities work with museums, not how museums work with communities.

“Songlines was initiated, driven and guided by Anangu elders who came to us and the Australian National University some seven years ago asking us to help them preserve these stories for future generations and to share them with all Australians,” Ms Neale said.

“These elders expressed a sense of urgency that their songlines were being ‘broken up’ and they asked whether we could help put them back together again.”

She said songlines were becoming lost or fragmented in many parts of Australia because of people’s extended absences from and loss of country.

“Songlines: Tracking the Seven Sisters helps redress this by realising the elders’ hopes of reconnecting with, revitalising and retrieving what they could of the songlines,” Ms Neale said.

“This is a grand drama of intrigue, mystery and beauty encompassing the passion and danger of creation, desire, love, flight and survival – audiences will be enthralled.”

Songlines: Tracking the Seven Sisters opens on September 15 and runs until February 25, 2018.