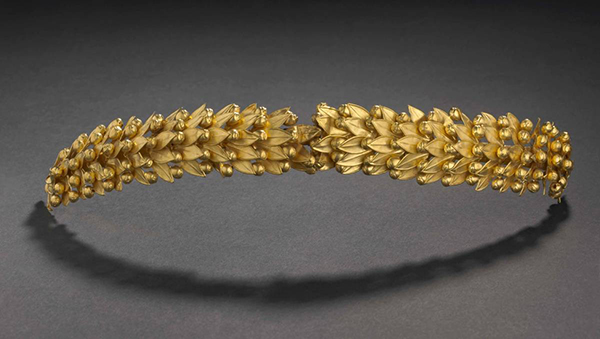 Sasha Grishin, Review: The Ancient Greeks at the National Museum of Australia is a dazzling exhibition, Canberra Times, 1 January 2022

Among the dazzling array of objects in the Ancient Greeks exhibition, there is a simple marble stele of Phila, daughter of Apollas – a gravestone within an architectural setting.

The stele belongs to the 2nd century BC and was found in Smyrna (now Izmir in Turkey) and entered the collection of the British Museum in 1947. The wreath above the figure of Phila designates that she received civic honours during her lifetime, while in the actual carved scene she is surrounded by two of her slaves.

Frequently it is overlooked that the wealth, power and democracy in ancient Greece was built on the backs of slaves and it is in a rare stele or the black glazed Oinochoe (jug) in the form of a Negro head from about 470 BC that we are reminded of this truth.

In Classical Athens slaves, who had no power or status, made up between 40 per cent to 80 per cent of the population and even poorer families owned several slaves.

Like Aboriginal people in Australian colonial painting, slaves in ancient Greece were omnipresent but rarely represented in art. 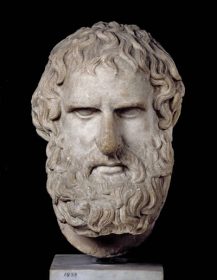 The exhibition Ancient Greeks: Athletes, warriors and heroes, the fourth exhibition at the National Museum from the British Museum since 2015, was selected for its tour to museums in Perth, Canberra and Auckland to highlight the theme of competition in ancient Greece.

The painted vases, sculptures, jewellery, armour and sporting paraphernalia, more than 170 objects in all, were chosen for the manner in which they commented on the competitive spirit in the fields of sport, politics, warfare, literature and within civic society.

In terms of the calibre of the items selected, it is a stronger exhibition than the Rome: City and Empire show that was hosted here in 2018.

The exhibition is loosely built around six sections with porous boundaries – Nike, goddess of Victory, sporting competitions, the performing arts, war, heroes and myths and society (competition in everyday life and in death).

In each section there are frequently one or two key works plus a score of pieces reflecting on the general theme. 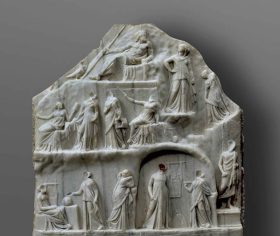 It is generally the vases, the terracotta figurines, jewellery and the paraphernalia that date back to ancient Greece, while the more monumental pieces are in the form of Roman copies, usually in marble, from Greek originals that were frequently cast in bronze.

One of the most memorable Roman copies at the exhibition is the life-size marble head from a statue of Euripides, the wonderful Greek tragic playwright.

Euripides, who wrote more than 90 plays of which about 18 have survived intact, influenced the course of drama from Shakespeare to Ibsen and Strindberg. This particular portrait bust entered the British Museum collection in 1879 and is thought to be based on an original from the early Hellenistic period.

The sombre, brooding expression and sense of introspection immediately led to the bust being identified as of Euripides, an identification later confirmed as more Roman copies were discovered based on this particular Greek original.

It is rare for marble busts to have their noses intact – frequently they are either knocked off or restored at a later date. This Euripides has survived its journey through time, although it should be pointed out that originally this Roman copy of the statue would have been of a whole figure and now only the head survives. 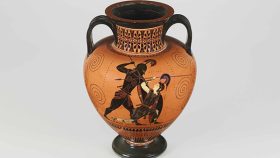 Unlike Roman sculpture, where in portraiture there was a desire to capture the unique and the specific, Greek ‘”portraiture” frequently sought to capture the essence of the person rather than the particulars of the individual. Our Euripides appears as an idealised image of the profound and troubled soul who wrote in his Medea: “Hate is a bottomless cup; I will pour and pour”.

Another treasure at the exhibition is a fragment of a Clazomenian painted terracotta sarcophagus with a battle scene with fighting hoplites, horseman and dog. Despite the fact that the fragment measures only 35 centimetres in length and 45 centimetres in height, there is an enormous amount of detail packed into the scene without it appearing crowded. What is also alluring about this piece is the use of colour with the silhouetted dark figures against a white ground and generous use of purple for crests, shield-apron, greave of hoplites, the mane and saddlecloth of horse and an oval patch above the shoulder of the dog. As is so often the case in ancient Greek battle scenes, the struggle appears almost symbolic with the outcome assured and there is an appeal to the poetic sensibility of the viewer to provide an evocative description.

John Keats’s Ode on a Grecian urn (1819) is possibly the most famous of these literary evocations in the English language and there are plenty of Grecian urns of exceptional quality in this exhibition to encourage us to embark on our personal journeys of meditation.

The British Museum collection of ancient Greek antiquities is stunning in its quality and size and while understandably many of the greatest treasures, including the Elgin Marbles, have not been selected for this exhibition, there are a number of exceptional pieces. These include the Vaison Diadoumenos (the ribbon binder), a number of exquisite black-figured amphora, a wreath of gold, gold jewellery and lively small figurines, including a small bronze statuette of Herakles that is thought to date between 400 and 350BC.

Sometimes I feel that the National Museum displays are too theatrical and the smoke and mirrors disguise the modest content. Here the display is spot on – excellent dramatic lighting, a couple of ingenious animations, a sniffery (you can find out what it is when you go there) and sensible wall texts and labelling.

It is an exhibition that appeals to the senses and rewards the intellect, which was a purpose for art in ancient Greece.

Ancient Greeks: Athletes, warriors and heroes: An exhibition from the British Museum. National Museum of Australia. Until May 1, 2022. nma.gov.au.