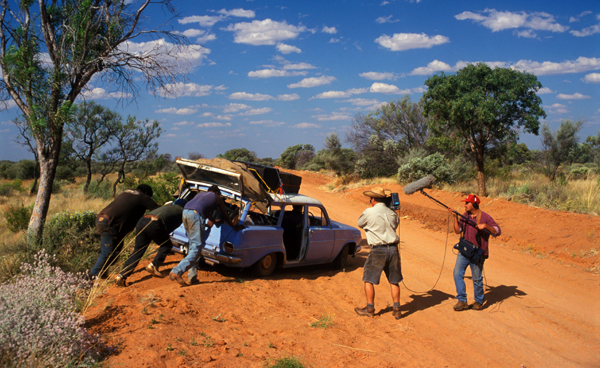 The National Motor Museum has won a major national award for its innovative Bush Mechanics: the Exhibition at the 2018 Museums and Galleries National Awards (MAGNA) in Melbourne last night. Created in partnership with Pintubi Anmatjere Warlpiri (PAW) Media, the exhibition has been recognised with the MAGNA for best temporary or travelling exhibition. Bush Mechanics: the Exhibition was in exemplary company with the shortlist containing some of Australia’s most prominent museums and galleries.

The exhibition is based on the popular TV series, Bush Mechanics, which first aired in 2001 and was viewed by millions of Australians. Disbelieving audiences watched the amazing tricks used to keep cars driving in the bush by young Warlpiri men from the remote Central Desert community of Yuendumu. Featuring original cars and objects from the series, new and old footage and a number of interactive displays, the exhibition has been touring nationally since 2017 and is currently on show at the Melbourne Museum.

“Bush Mechanics: the exhibition aimed to be different, challenging and entertaining, just like the television show it was based on,” said National Motor Museum Director, Paul Rees. “We are extremely pleased that the exhibition has been received so well by audiences and has now won a MAGNA award. The community of Yuendumu is very proud of the enduring popularity of Bush Mechanics, and we know this latest recognition will be celebrated by many people there.”

The exhibition differs from many touring exhibitions of its kind in that it has reached some of Australia’s most prominent and most obscure venues. It is also bilingual, featuring exhibition text in English and Warlpiri.  “Our aim was to reconnect Australians with this fascinating look at life in the Central Desert region as well as to temporarily return some significant cultural heritage to Aboriginal communities in the Tanami Desert. That is why we created an exhibition that could sit as comfortably in the Melbourne Museum – Australia’s most visited museum – and in the National Museum Canberra as in a basketball court in Yuendumu,” said exhibition curator Mick Bolognese.

After opening at the National Motor Museum in Birdwood (SA) in April 2017, the exhibition travelled to Northern Territory venues at Yuendumu, Tennant Creek, the Royal Darwin Show and the National Road Transport Hall of Fame at Alice Springs. It is currently showing at the Melbourne Museum until 15 July 2018, and will next be displayed at the National Museum of Australia in Canberra from 3 December 2018 to 3 February 2019 and later at regional venues in Queensland until 2020. An accompanying publication, Bush Mechanics: from Yuendumu to the world, edited by Mandy Paul and Mick Bolognese, is published by Wakefield Press.