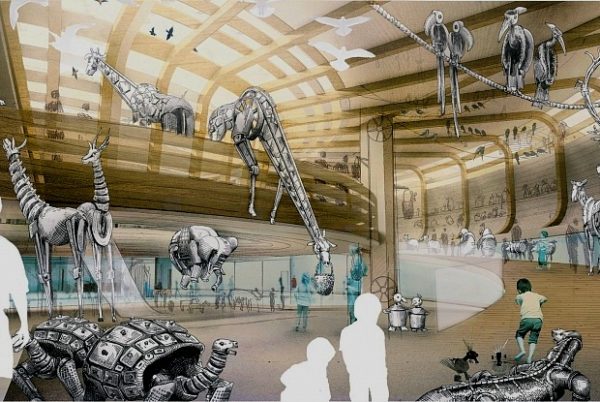 A jury appointed by the Jewish Museum Berlin awarded the first prize in an architectural competition for a new children’s museum to a concept inspired by Noah’s Ark proposed by the firm Olson Kundig of Seattle.

The planned children’s museum is designed for 5 to 12 year-olds and should be completed in 2018 and opened in 2019. It will be located across the road from Daniel Libeskind’s main building, in a 1960s concrete and glass structure that was once a wholesale flower market, and is now known as the Eric F. Ross building. The same space has housed the W. Michael Blumenthal Academy, designed by Libeskind, since 2012.

Peter Schäfer, the director of the Jewish Museum, says in a statement that the Olson Kundig design “has the potential to unpack the biblical story in all its relevance, as well as building connections with the present day—rescuing people and animals, the relationships between nature and civilization, and the chance to make new beginnings.”

The proposal includes a circular, wooden frame representing the ark, with an amphitheatre at the centre. The visitor, in the role of Noah, encounters various interactive installations and abstracted models of animals. Features include a “rainbow gallery” and an exit slide.

The budget for the children’s museum is €3.44m with a further €2.11m to finance the exhibition. The second prize was awarded to the Berlin firm Staab Architekten GmbH and third prize to Michael Wallraff ZT GmbH of Vienna.