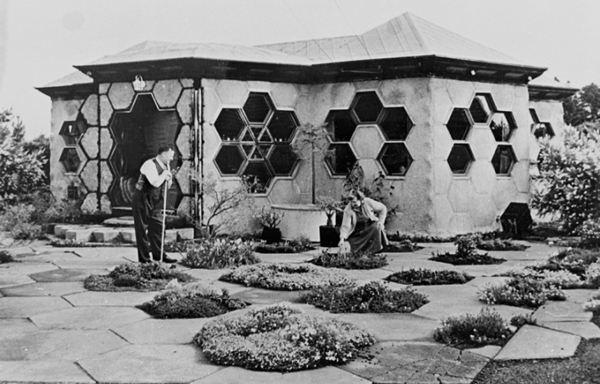 Roy Brewster and Nettie Brewster pictured outside the Norian house in the 1950s at 36B Sanders Avenue, Westown, New Plymouth (Collection of Puke Ariki and used with permission).

Claire Voon, The Beekeeper Who Craved a World Without Right Angles, Hyperallergenic,27 January 2017

A man obsessed with hexagons tried to remake the visual world around him.

New Plymouth, New Zealand — “No right angles.” That was the decree Roy Brewster set for himself and stood firmly by throughout his life. The New Zealander, born in 1905 in the Taranaki region, instead embraced angles of 120˚; he was an avid apiarist, and to him, life’s perfect shape was the hexagon.

So to rid his life of the right angle — which, to him, represented nonsense, confusion, and hate — Brewster designed and built a house in 1952 that celebrated the six-sided figure. Modeled on the structure of honeycomb cells, it soon became known to many as The Beehive House. Nearly everything was hexagonal, from its floor plans to its windows to its shelves. A hexagonal quilt adorned the bed he shared with his wife, Nettie, and a copy of the Mona Lisa hung in the living room in a hexagonal frame, against hexagonal parquet wall panels. Outdoors, the garden’s paving stones led to an angular letterbox. The official name Brewster gave it was “The Norian House” — shorthand for “NoRIght ANgles.”

Brewster dismantled his one-story building at 36B Sanders Avenue, New Plymouth, in 1974, but the city’s Puke Ariki library holds some of its fixtures and furnishings. You can see some of these, such a chair with a hexagonal seat and a table with drawers that open at an angle, at the library’s current exhibition A Different Angle. Accompanying relics from Brewster’s home are documents that tell the story of his distinct philosophies and visions. The archive includes his hexagon-heavy architectural plans, letters, and news clippings chronicling his pursuits, as well as personal notes that reveal his deep belief in religion. It was his faith, first and foremost, that guided him to seek truth and harmony: he believed the honeycomb was a message from God that showed humans the best way to live, while parallel lines built a world of lies and evil.

“If man chooses square world he readily makes himself a slave to machines and money,” he had once scribbled. “For what shall it profit man if he gain the whole world and yet lose his own soul.”

Brewster’s ideas didn’t spread far, although he would share his vision of a world wiped of right angles with visitors to his Norian House. Between 1954 and 1971, it was a tourist destination, attracting around 250,000 guests who would sign their names in a hexagonal guestbook (which featured stamps Brewster designed to divide pages into hexagonal cells for individual entries). As souvenirs, Brewster also sold honey collected from his beehives spread throughout Taranaki, branded as Norian Honey, and shipped it nationwide in hexagonal crates. The house itself literally embodied the work of Brewster’s beloved creatures: he had built it out of World War II ammunition boxes made of New Zealand honeysuckle.

Logistics, of course, prevented the Norian House from featuring just hexagons, although Brewster tried to avoid the right angle whenever possible. The roof and ceiling featured triangular and diamond forms, while mirrors and other furnishings were round. When parts of the house did require the wretched 90˚ angle, Brewster devised reasons for their necessity: the perpendicular formed by the floor meeting the wall, for instance, he deemed a “radial line to a round earth,” as per a description by curator Lucy Macfarlane.

Brewster sold his unique architectural vision to the Tainui Home Trust Board on June 6, 1966, for £6,666.66 (~$8,000 US), supposedly guided by a message from God. While the decision made little financial sense, the relinquishing of his honey haven under those conditions spoke volumes about how intensely his beliefs drove him.

In 1973, Nettie passed away, and Brewster dismantled the Norian House the following year. The deconstruction made the front page of The Taranaki Herald, and pieces of the legendary house were gathered by his descendants, who integrated them into their own homes. One diptych by contemporary photographer Ann Shelton documents a local cottage, rectilinear in plan but with a façade spotted with windows, all hexagonal.

Positions Vacant » View All
» Kaiako Reo Māori – Te Papa
» Visitor Experience Officers x 2 – MAGNT
Latest News » View All
Why Bob Ross was the biggest artist of 2020
“there are no mistakes, only happy accidents” Read more.
UK Sec of State seeks veto for heritage vs
museums places for context & understanding Read more.
City of London to remove slaveholders’
Statues from Guildhall headquarters Read more.
SAM’s commissions Kaurna boomerang
for space – ancient story of exploration Read more.
The bird librarian: Nature’s Where I work
Leah Tsang collection mgr of ornithology Read more.
Top +
Council of Australasian Museum Directors, c/o Ms Daryl Karp, Museum of Australian Democracy at Old Parliament House PO Box 3934 Manuka, Australian Capital Territory 2603 Australia, © CAMD 2021
Copyright: All information and resources provided on this website remain the copyright of the Council of Australasian Museum Directors. Permission is granted for viewing and downloading for personal and not for profit purposes. Those wishing to reproduce any materials for commercial, educational or other uses are requested to contact us.
Disclaimer: The content of this website is provided for information purposes only and is not intended as a substitute for professional advice. No claim is made as to the accuracy or authenticity of the content of the website. The Council of Australasian Museum Directors does not accept any liability to any person for the information or advice (or the use of such information or advice) which is provided on this website. The information on our website is provided on the basis that all persons accessing the site undertake responsibility for assessing the relevance and accuracy of its content. No responsibility is taken for any information or services which may appear on any linked web sites. Hostgator.
.