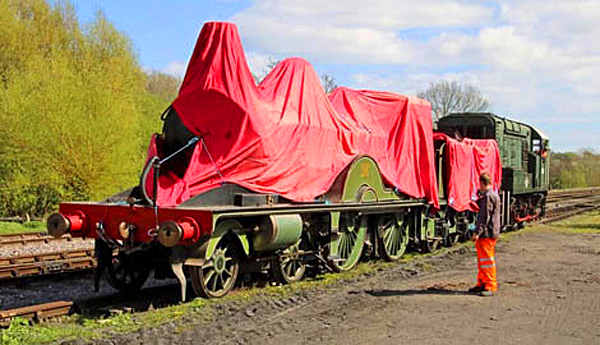 The National Railway Museum (NRM) defended its decision to deaccession its William Adams-designed T3 class locomotive No. 563, which was used in stage productions of The Railway Children, following criticisms from former director Steve Davies.

The locomotive, which was housed at Locomotion, the NRM at Shildon in County Durham, was transferred to Swanage Railway, a heritage steam train service but not an accredited museum, in April as part of a collections review.

In a blog on the museum’s website, senior curator of rail transport and technology Anthony Coulls, wrote: “In the case of the T3, we had a number of 4-4-0 type locomotives, mostly from the Victorian or Edwardian eras, which had resulted in an imbalance of locomotives from this period in the collection.

“We concluded that gifting the T3 to a well-respected heritage railway and one with which it has strong historical connection, would better enable it to be enjoyed by the public for future generations.”

But, writing in Steam Railway magazine, Davies said: “It is curious that the NRM seeks to justify the disposal of the T3 on the basis that it is surplus to requirements, and that there is somehow an ‘imbalance’ in the number of 4-4-0s from the Victorian and Edwardian era.

“I have no idea what ‘imbalance’ means in this situation: too many engines? Too many originating from one region? Too many of one mechanical type?

“The inescapable fact is that the real ‘imbalance’ within the NRM is that of the sheer scale of the collection versus the resources available to properly conserve, display and interpret it for the collections.”

Kelvin Hopkins, the MP for Luton North and a former shadow secretary of state for culture, also writing in Steam Railway magazine, said that “the T3 has essentially been privatised without public consultation”.

Hopkins told Museums Journal: “Giving away irreplaceable and immensely valuable examples of Britain’s proud industrial heritage is unforgivable. It sets a dangerous precedent for all our national museums, which could be followed by other institutions if not stopped and indeed reversed as a matter of greatest urgency.

“I will be raising the matter in parliament at the earliest opportunity and pressing ministers to take immediate action. I will be tabling an early day motion and seek to gain the support of fellow MPs from all sides of the house.”

In his blog, Coulls wrote: “In this instance, gifting over loaning gives Swanage Railway absolute control over investment in the locomotive and its conservation, while the terms of the transfer mean that should Swanage no longer require it, it will be offered back to the NRM in the first instance.

“Had we simply entered into a loan agreement, Swanage would be beholden to the museum over the engine for the duration of that loan.”

Others have expressed concern that Swanage Railway lacks the capacity to store the T3 under cover and conserve it.

David Rawsthorn, the head of sales and marketing at Swanage Railway, told Museums Journal that the locomotive is currently on display at Corfe Castle Station, but when the weather changes it will be sheeted under tarpaulin.

Ultimately it will be moved under cover for examination, he said, although Swanage Railway has not yet established where.

Swanage Railway’s long-term aim is a full restoration to return the engine to steam, Rawsthorn added, and once the examination is complete Swanage Railway Trust will begin a campaign to raise funds for this.

The NRM’s collections review ended this month with the transfer of its GWR 2-8-0 28XX Class locomotive No. 2818 to Steam – Museum of the Great Western Railway in Swindon.

The NRM is part of the Science Museum Group, which has seen its budget cut by over 30% from 2010-14, then a further 5% in 2015-16. The NRM is currently planning a £40m renovation of its York site, with new gallery and exhibition spaces.