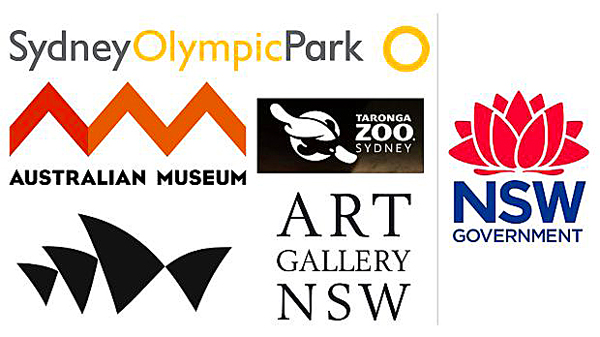 The directive would have replaced individual logos with the generic NSW government waratah.

Sydney’s most loved cultural icons have won their battle for exemption from an “Orwellian” diktat requiring them to dump their distinctive logos in favour of the government’s generic waratah.

The directive, quietly issued by Premier Gladys Berejiklian’s department in August, was designed to align the branding of some 800 disparate government entities for use on signs, advertising and other communications.

But icons such as Taronga Zoo, the Sydney Opera House and the city’s major museums were aghast at the thought of ditching their longstanding individual logos for the official NSW waratah.

On Thursday, the cabinet’s Standing Committee on Communication and Government Advertising approved full exemptions for those institutions, as well as the State Library, Royal Botanic Garden, Centennial Parklands and others.

“We offered our cultural institutions the option of applying for exemptions to using the waratah brand in appropriate circumstances,” a spokeswoman for Ms Berejiklian said. “The NSW government has granted exemptions to several organisations who made applications.”

The exemption means the Opera House will continue to be able to use its distinctive “sails” logo, while Taronga zoo will retain its platypus. The organisations, also including the Art Gallery of NSW, have been granted full exemptions, meaning they won’t need to use the waratah at all.

The decision will be applauded in cultural circles and on the boards of the affected institutions, who were flummoxed by the rebranding drive. Artistic directors at a Herald arts panel last month – including Australian Museum boss Kim McKay and Opera House chief executive Louise Herron – were united in their opposition and expressed diplomatic optimism about receiving an exemption.

“Ask [us] again at dinner,” Ms Herron joked, alluding to simmering frustrations about the matter.

Penelope Figgis, a former board member of Tourism Australia and the Sydney Olympic Park Authority, described the rebranding exercise as an “Orwellian proposal” that “completely ignores the value of the intellectual property in the public and commercial endeavours of our institutions”.

One former manager at a major cultural institution likened the rebranding effort to “an episode of Utopia“, the ABC comedy series satirising government bureaucracy.

Shadow arts minister Walt Secord said it was an “embarrassing and pointless exercise for the government” and welcomed Thursday’s backdown, suggesting it could spark more requests for exemptions from throughout the bureaucracy.

“It’s a shame that they put the cultural institutions through this,” he said. “It didn’t make sense, it was simply the government trying to engage in a PR branding exercise over the interests of the cultural organisations.”

Labor asked Arts Minister Don Harwin about the controversy in Parliament on Thursday and were advised by Mr Harwin that the exemption applications were still being assessed. The premier’s department confirmed the exemptions Thursday afternoon.