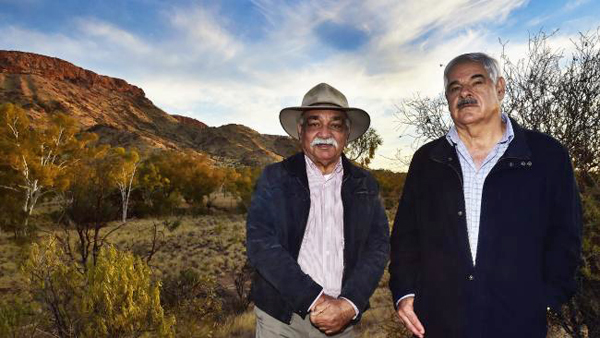 If you believe the hype, northern and central Australia’s cultural institutions are in for a transformation. There will be a new fine art museum outside the Northern Territory parliament, perhaps part-funded with revenue from a carpark to be rebuilt underground in a project tied to Malcolm Turnbull’s Smart Cities initiative.

A history museum recounting “the story of Territorians” will connect the crescent suburb of Cullen Bay to the opposite end of the city, overcoming unease that has long held back redevelopment of the site of the Kahlin Compound for Stolen Generations people. Revamped regional galleries in Katherine and Tennant Creek will join a network of “art trails” running from remote communities into the Stuart Highway, where travellers ricochet up and down with the changing seasons.

Downtown Alice Springs will get a display of megafauna fossils. The bones now occupy a dance space at Araluen Arts Centre, which itself may need an overhaul once its claim to showing some of the region’s best indigenous art exhibits is diminished.

The centrepiece of this vision is a national indigenous art gallery and culture centre: one institution or two, depending on who you ask. The Top End already hosts the annual National Aboriginal and Torres Strait Islander Art Award, the National Indigenous Music Awards and Garma, so a national gallery in the Red Centre may be a natural fit. Rising from the desert, or possibly one of a half-dozen urban locations around Alice Springs, this ambitious scheme aims to conduct multifarious indigenous ­voices into a chorus.

Its boosters say it should court shows from the best collections interstate and overseas, foster new work, educate and employ. Aboriginal people should own it conceptually: a venue capable of inspiring those in whom a 60,000-year-old culture survives to “drive 1000km and roll out their swags”. It also must be able to handle the most precious artworks safely.

Local business owners and grandees pray for something to revive tourist flows that atrophied with the high dollar and direct flights to Uluru. Others concerned about ongoing racial division think a “warts and all” account of Australia’s past could repair Alice Springs’ image as a place for rough justice and riverbed drinking, and help socialise future generations of all colours and creeds. Some describe a nation-building project attracting overseas attention.

Jointly heading a steering committee for the indigenous art gallery is curator Hetti Perkins. Perkins won acclaim at the Art Gallery of NSW before retiring in 2011 with a warning that the “mainstreaming” of Aboriginal art and culture mostly failed indigenous people. Territory Labor committed $50 million to the gallery project on its way into office. Similar ideas have been mooted for Perth, Sydney and elsewhere.

“In my experience, it’s the first time that somebody has put a cheque on the table and said ‘let’s go’,” she says. “To see the Territory investing in the value of its cultural resources to its economy, to our nation, is fantastic.” At her side is Philip Watkins of local industry body Desart. “It needs to be national … it’s got to be something spectacular,” he says. “What’s its core purpose? What sort of facilities will it need? Who are its key partners and relationships, and what will it take to make it sustainable? These are the sorts of things we are talking about now.”

Chief Minister Michael Gunner is one of several interested parties to recently visit MONA, which he sees as a model for the Territory’s cultural schemes.

In the year to December, about 340,000 people visited MONA, contributing about $760m to the Tasmanian economy; about 50,000 of those visitors said their decision to travel was influenced specifically by MONA, according to official figures. MONA benefited from staged, private development largely free of the sorts of constraints that tend to bind governments. The project’s success often is attributed to the vision of its patron, gambler David Walsh.

“MONA is a holistic, multidimensional experience,” Wilsdon says. “One of the things I have learned from MONA is that there is no such thing as just a gallery: galleries attract a broad spectrum of visitors with varying levels of expectation … Another thing I think is particularly important is architecture and a sense of place.

“A project with national and international significance means it’s critical to get the location right and create a beautifully designed, enigmatic yet accessible, practical and functional development.”

Somewhat counterintuitively, Labor’s announcements, which include $100m to overhaul Darwin’s CBD and an additional $20m for the Alice Springs indigenous cultural centre, precede a 10-year “museum master plan” under development. The “art trails” project has a grants program but no map. Privately, politicians say the haste is needed to compete for funds under Smart Cities and other initiatives. Leading architects Lawrence and Andrea Nield have produced plans for Darwin and Alice Springs urban centres, complete with sketch drawings by Hully Liveris Design Company for the proposed new fine art museum and others by Troppo Architects for the history museum. The government even has commissioned a model of outdoor temperatures and hopes to reduce Darwin’s by more than 2C. Sites for the planned new Alice Springs facilities have yet to be chosen.

“Aboriginal people across the country have to recognise this as their national art gallery,” Gunner says. “We want this to be the part of Australia, the part of the world that best celebrates Aboriginal culture and art.”

Set against these aspirations is the Territory’s record of managing cultural organisations. The Museum and Art Gallery of the Northern Territory had about 120 staff when it was brought under control of the bureaucracy in 1998; when it finally became an independent statutory authority in 2014 it had 37 employees and a shrunken reputation. The Darwin Festival has emerged from external administration but remains run by accountants. The former Giles Country Liberal government announced its own idea for a new Darwin gallery, but with only a fraction of the funds required and an unworkable design. The project collapsed ignominiously.

“Building a museum, like any other building, will stimulate construction activity in the short term but afterwards it will present an ongoing cost; at the same time Labor is running the largest budget deficit in the Territory’s history,” he says. “Labor argues that it might increase tourist numbers but it hasn’t done any studies or research into the matter. This is the Field of Dreams approach to infrastructure.” Supporting the initiatives could require a doubling or tripling of ongoing annual public spending on cultural institutions. A collapse in GST revenue could leave the sector marooned.

Director Marcus Schutenko hopes MAGNT will be asked to run the Darwin fine art and history museums. Extra staff would likely require an expansion of MAGNT’s building at Bullocky Point. There has been talk of turning that into a science museum. “A national indigenous art gallery will succeed on a single principle that is whether it’s properly funded,” he says. “Everybody has their plans to do facilities, but the thing that gets forgotten is commitments to ongoing funding.”

The Council of Australasian Museum Directors recently wrote an appeal to the nation’s arts ministers on the subject. Higgins suspects at least one of the Darwin sites could be better used.

“I’ve heard ideas such as international student accommodation, a Chinatown precinct, a world-class library, a retirement village or aged-care facility, or some combination of any or all of these,” he says. “It is ad hoc and belated for the government to announce a museum master plan after announcing heritage trails, a cultural centre and fossil museum in Alice Springs and a new museum and fine art gallery in Darwin.”

Doubts are emerging about whether the Territory can manage so many schemes. Experts grumble about bureaucratic ineptitude and foot-dragging. Different groups favour different sites for the Alice Springs fac­ilities.

Gunner sees MAGNT as the “natural manager” for the indigenous art gallery and has been championing it and the culture centre as different institutions. Owen Cole and Harold Furber, local businesspeople who have built considerable support for a combined national indigenous art and culture centre in Alice Springs, see that as unworkable.

“I don’t think they can be two separate institutions,” Furber says. “Aboriginal art and culture are naturally linked. If you put the projects together, you’ve got a substantial amount of money.”

Just as MONA found a point of difference through curation, Cole thinks Alice Springs could distinguish itself by offering art and culture portrayed exclusively by indigenous people.

“We want (indigenous) people to be involved because they want to be, not because they have to be, and that’s not going to happen with a government-run institution,” Cole says. “It needs to be owned by the indigenous community of Australia.”

Djambawa Marawili, chairman of the Arnhem Northern and Kimberley Artists Aboriginal Corporation, says the “process and leadership” must come from Australia’s first people.

“People who know their identity, sacred sites, sacred stories, sacred sand sculpture, patterns and designs — the story from the land,” Marawili says. “The No 1 thing … (is) strong Aboriginal leadership and governance.”

Gunner says he is open to the national indigenous art gallery and culture centre becoming one project. A fight remains over where it will be located.

Wilsdon sees the potential for both the private sector and local community to contribute. “(This project) has the potential opportunity to be developed on a greenfield site with fully integrated services. That was something we didn’t have at MONA, and we’ve had to work through a number of physical and cultural constraints,” Wilsdon says. “It’s boring, but you can’t forget things like storage space and car parking.”