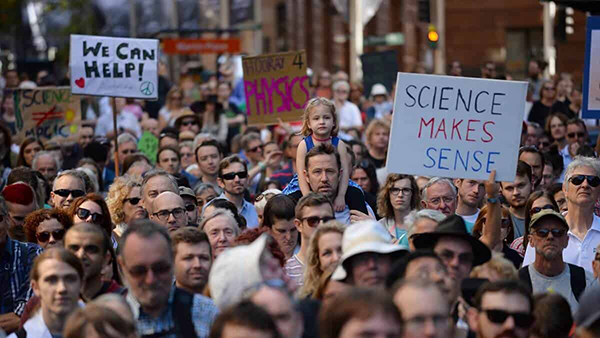 Supporters of science and research gather for the March for Science protest in Sydney on April 22, 2017. Thousands of people rallied in Australia and New Zealand on April 22 in support of science, the first of more than 500 marches globally triggered by concern over the rise of “alternative facts”. Credit: Peter Parks/AFP via Getty Images.

Australians firmly  trust science and scientists, believe that science strengthens the country, and want more investment in science to speed post-pandemic recovery, according to a major new study that kicks off National Science Week 2021.

The 3M State of Science Index measures public attitudes in 17 countries, and its new data is released today at the launch of National Science Week, delivered by Science and Technology Australia.

The survey finds Australians have far higher trust in science than is found in many other nations: nine in ten Aussies say they trust science and scientists, 19 in 20 believe greater investment in science will make the country stronger, and nine in ten say science should drive policy decisions.

The findings are heartening at a time when scientific knowledge can be hotly contested in the public sphere, from Facebook groups to the Federal Parliament.

“This new data shows us that Australians have very, very strong levels of trust and confidence in science and scientists,” says Misha Schubert, CEO of Science and Technology Australia. “That’s really important when we think about all of the fields of policy and the challenges ahead that the country will need to navigate.”

Schubert says that despite unscientific rhetoric abounding, the findings make sense in the context of a global crisis that’s been navigated and managed thanks to cutting-edge science.

The theme of this year’s Science Week launch event nods to the trials and tribulations of the past 18 or so months, featuring a panel of experts speaking to the ‘Science of Recovery, Resilience & Renewal’.

“Since 3M started the State of Science Index four years ago, trust in science globally remains at the highest level we have recorded. The Index has captured a moment in history when the impact of science on our lives has never been more visible,” he says.

“While the pandemic has been a truly unpredictable hurdle for people in Australia and around the world, we have had some remarkable achievements due to the power of science. People once considered to be hidden away in labs have become the heroes of our society.”

Schubert agrees that Australian scientists deserve recognition after a challenging year and a half: “We’ve seen so many Australian scientists lending their expertise deeply in the service of the nation as guides and experts, explaining to the wider community what we’re doing to try and save lives and keep people safe.”

And Schubert says Australia’s collaboration with the international scientific community demonstrates the sparsely populated nation as a powerful player on the global stage.

“In COVID times, we’ve seen that project of real-time collaborative global science in hyperdrive, because the work that will often happen at conferences and events, with the research community travelling from one country to another, has happened in daily video conferences.