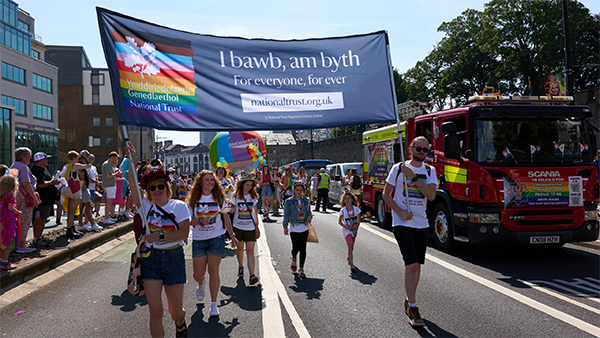 National Trust members have voted down six motions at its annual general meeting (AGM) at the weekend, including one condemning its involvement in Pride events.

More than 127,000 members took part in the AGM, one of the trust’s highest ever turnouts.

“Our AGM is one of the most important events in our calendar,” said Hilary McGrady, the director-general of the National Trust. “It is an essential part of our democratic governance process, as it gives our members the opportunity to ask the questions on the subjects that matter most to them and to have their say on the direction and focus of the National Trust.”

Some of the motions put forward for the AGM were the result of campaigning by the dissident member group Restore Trust, which seeks changes to the way the National Trust is managed.

Questions from members ranged from the trust’s future projects to engage children and young people, to its plans for Clandon. They also covered ensuring sustainability in trust cafes and promoting sustainable travel to sites, among other topics.

“The joy of the trust is that people take that benefit in many different ways,” said McGrady. “Some people want to dive deep into our collections, others love a good garden, and there are those for whom the tea and cake is the best bit. Our task is to try to serve everyone – and that’s not always easy.

“It has been particularly hard post Covid due to staff shortages, and supply chain issues. This has sometimes meant a more reduced offer than we would have liked.”

McGrady also talked about the trust’s efforts to be more inclusive and accessible.

“We know from research that there are still some barriers to engaging with the trust and we’re working hard to address them,” she said. “This year we’ve allocated £4m of investment to make our places more accessible. That includes audio described guides at Ickworth, and British Sign Language interpretation at Goldophin.

“I’m also proud that the trust was represented at Pride celebrations earlier this year. It’s a small act – but an important one. We engage with lots of different national events and festivals each year because “for everyone, for ever” is more than just a slogan – it’s about reaching out, and welcoming in.”

The National Trust looks after 780 miles of coastline, more than 250,000 hectares of land, and over 500 historic houses, castles, ancient monuments, gardens, parks and nature reserves.