You are here: Home » Articles filed under: 'News' » Article: 'NYT: A War Memorial is being expanded:'

NYT: A War Memorial is being expanded: 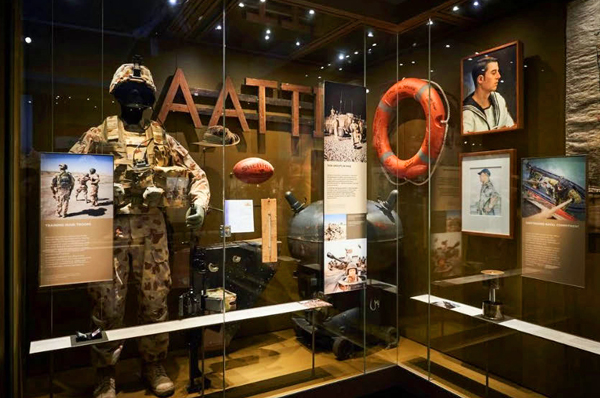 Nearly 500 million Australian dollars have been allocated to expand the memorial’s exhibits. Credit: Christina Simons for The New York Times.

Jamie Tarabay, A War Memorial Is Being Expanded. Some Say It Whitewashes History, The New York Times, 19 February 2019

The Australian War Memorial, at a cost of hundreds of millions of dollars, will grow to commemorate recent conflicts, including war zones in which Australia still has troops.

CANBERRA, Australia — In a small section of the Australian War Memorial, past softly lit halls displaying World War I and II battlefield dioramas, is an exhibit dedicated to the Iraq War.

In the display cases are gas masks and uniforms, modern updates of those worn a century earlier when troops fought at Gallipoli and the Western Front. The accompanying text tells visitors that the “U.S.-led invasion of Iraq was motivated by concerns that the Iraqi regime continued to hold weapons of mass destruction.”

The description goes on to chronicle Australia’s role in the 2003 invasion, which included committing special forces, carrying out naval and air operations, and training Iraqi troops. But it does not mention that the United States, Britain and Australia greatly exaggerated that threat, and no such weapons were found.

Now that partial account of the war in Iraq, as well as Australia’s participation in the war in Afghanistan, is about to get a significant boost: The memorial — composed of cenotaphs, a research center and a museum — has received 498 million Australian dollars (around $350 million) in government funding to build new sections commemorating the country’s more recent foreign conflicts.

Critics contend that the memorial’s expansion, to include a bigger focus on Iraq and Afghanistan, minimizes the enormous losses of earlier wars. Moreover, they say, the memorial’s administrators have sanitized the history of the present conflicts in order to legitimize ongoing deployments in Afghanistan and the Middle East.

Those death tolls pale in comparison to the more than 60,000 Australians who died during World War I, and the 39,000 killed in World War II — conflicts that were formative moments in Australia’s history.

Nearly every schoolchild in the country will at some point visit the memorial. They are taught how Australia, by participating in the world’s most significant modern wars, emerged from Britain’s shadow to become its own nation. It is a place where military heroism is celebrated as a foundational national principle.

The tone of the history presented in the memorial changed after the Sept. 11 attacks, said Peter Stanley, a professor at the University of New South Wales and the former principal historian at the memorial.

Beyond questions of historical accuracy and the glorification of war, the expansion has also been criticized for its commercialism — the Afghanistan exhibition is sponsored by Boeing — the secretive process by which the government approved the plan, and concerns that the money could have been better spent to help veterans.

Some of that criticism has focused on Brendan Nelson, the memorial’s director. Mr. Nelson was Australia’s minister of defense from 2006-2007, at the height of sectarian bloodshed in Iraq and a spike in suicide attacks in Afghanistan.

His time as defense minister, Mr. Nelson said, “changed me in ways I didn’t really understand until I had finished.” When he became director of the memorial, he pushed for representation of the wars in Iraq and Afghanistan, even as thousands of troops remained there fighting.