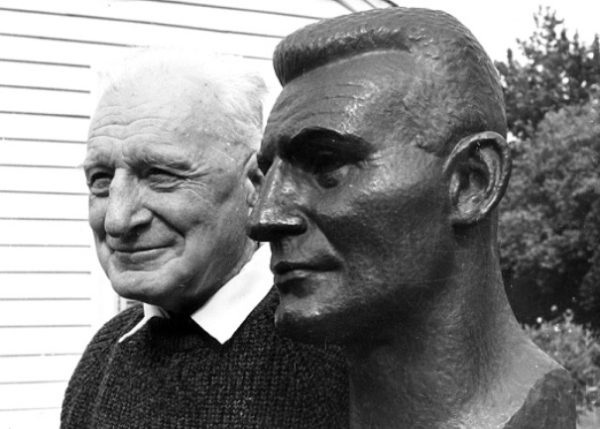 New Zealand’s largest collection of Chinese artefacts is now available for the public to view in its entirety for the first time.

A website (http://www.rewialleyart.nz) documenting and describing the 1,378 objects in the Rewi Alley Collection at Canterbury Museum has been developed by researchers in the first stage of a three-year Marsden-funded project.

Dr Richard Bullen (University of Canterbury and Canterbury Museum Research Fellow) and Associate Professor James Beattie (University of Waikato) are investigating the scope of the Alley Collection, why and how it developed and whether the gifting and display of artefacts encouraged favourable perceptions of a ‘New China’ in New Zealand during the Cold War.

Springfield-born Alley (above) visited China in 1927 out of curiosity. He stayed for the rest of his life, only occasionally returning to New Zealand. He donated his first objects to Canterbury Museum in 1932. In 1956 then Canterbury Museum Director Roger Duff visited China and brought back a large collection from Alley. Alley brought more objects during trips to New Zealand in the 1960s and 1970s but more often relied on an extensive social network of New Zealanders visiting China to deliver objects to Duff on their return home.

Dr Bullen says, “The website brings together, in one publicly accessible place, a unique collection spanning 5,000 years of Chinese art and culture. Many of the objects are very old and very rare and we’ve discovered some surprises, for example a painting by important twentieth century Chinese painter Li Keran.”

Associate Professor Beattie says, “The Alley Collection came together with the approval of the Chinese Government in a very early example of Communist China’s use of art for cultural diplomacy and as a way to favourably present ‘New China’ to the West. Alley’s connection to the highest levels of China’s communist leadership, including Chairman Mao, was clearly instrumental in making this happen at a time when there were no diplomatic relations between China and New Zealand.“

Canterbury Museum Director Anthony Wright adds, “This is a great collaborative research project which is making a significant contribution to our own knowledge and understanding of the collection and the fascinating story behind it. Museum visitors can see a number of the artefacts in our Asian Arts Gallery and we’re looking forward to adding images and information to our own public website in the near future.”

In 2015, Dr Bullen (right) and Associate Professor Beattie (left) travelled to Inner Mongolia and China to some of the sites where the collection was gathered and to visit the Shandan Museum built in the 1980s to house Alley’s remaining collection of 3,500 objects.

The website will be launched tonight at an international research symposium Museums, Art and Chinese Cultural Diplomacy in the Pacific at the University of Canterbury. Alongside the website, the $434,000 Marsden-grant project is planned to include an exhibition, articles, talks and a paper.

Highlights of the Rewi Alley Collection include neolithic objects discovered on the Shandan Bailie School farm where Alley was headmaster in the 1940s, Han Dynasty ceramics from the Gobi Desert, a superb collection of jade, belt buckles, snuff bottles and paintings by two important twentieth century Chinese artists. Alley and Duff saw ceramics as the best way to illustrate the length and sophistication of Chinese cultural history and attempted to have each phase of Chinese ceramic history represented in the collection. The Collection includes furniture from the Imperial Palace Museum in Beijing given for the 1958 opening of Canterbury Museum’s Hall of Oriental Art. The permanent Museum exhibition was the first of its kind by at least 20 years in Australasia, and early by world standards.