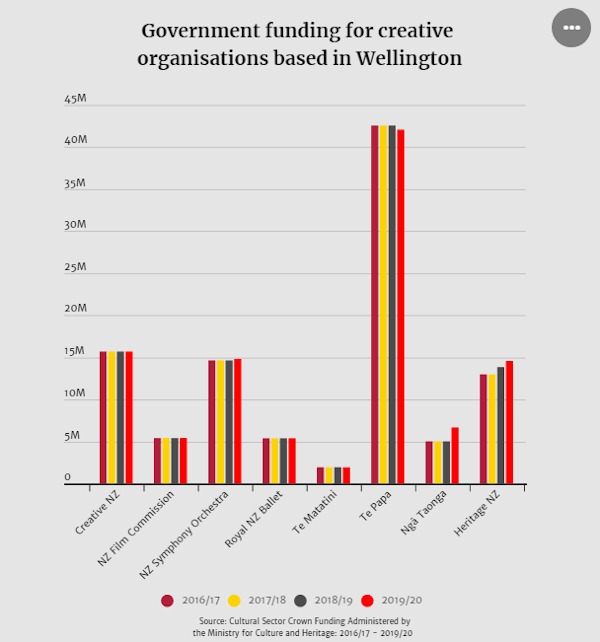 The Wellington Report 2019 – six years on from the first version – takes an in-depth look across seven days at the city and region in terms of economy and employment, governance, housing, resilience, arts and hospitality, transport, and quality of life.

Whether a full house on opening night or a small group gathered to catch a glimpse of a Colin McCahon original, Wellingtonians are avid consumers – and supporters – of the arts.

Despite that, over the past 10 years, the city has been challenged multiple times by much larger Auckland for the title of New Zealand’s arts capital – to the point where Metro magazine claimed the City of Sails had trumped Wellington in the culture wars, thanks to its larger population, cultural institutions and international events.

Flash-forward to 2019 and the debate is still raging but when it comes to the nation’s cultural institutions, many in the know say Wellington wins hands-down, with hundreds of millions of dollars worth of government money spent every year on maintaining some of the country’s biggest artistic organisations – the majority of which are based in Wellington. 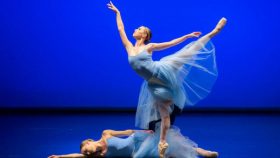 Despite the temporary loss of the St James Theatre, the Royal New Zealand Ballet has stayed put in the capital.

For proud Wellingtonian and Associate Minister for Arts, Culture and Heritage Grant Robertson, the country’s cultural crown still very much belongs to the capital which he believes still “punches above its weight” when it comes to creative opportunities.

Having national arts, culture and heritage organisations, such as the Royal New Zealand Ballet (RNZB) and NZ Symphony Orchestra, headquartered in Wellington added significantly to the cultural landscape, he said.

“Firstly, Wellingtonians directly benefit from easy access to them and regular shows …The presence in the city of so many creative people has spin-off benefits in terms of their personal contributions to other endeavours, be it side projects or supporting up and coming artists, or just contributing to their communities, schools, etc.” 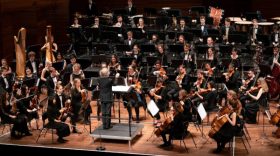 Having national arts, culture and heritage organisations, such as the NZ Symphony Orchestra, headquartered in Wellington added significantly to the cultural landscape, Robertson said.

The RNZB were forced to bid adieu to its long-term home within the earthquake-prone St James Theatre in mid-2018, with seismic strengthening and renovation work set to see it closed till at least September 2020.

Wellington Mayor Justin Lester said, at the time, he was keen to keep the ballet company in the city centre.

“The ballet has a long history in Wellington and I’m keen to ensure the city remains its permanent home … We also want to make the arts more accessible to Wellingtonians, and now passers-by will get the opportunity to view the rehearsals by some of New Zealand’s best dancers.”

Not all of the city’s cultural treasures originated in the capital though, with one in particular embodying the words written by poet Lauris Edmond and emblazoned on the City to Sea Walkway.

‘It’s true you can’t live here by chance, you have to do and be, not simply watch or even describe. This is the city of action, the world headquarters of the verb.”

The annual World of WearableArt (WOW) show began in 1980s Nelson under the watchful eye of founder Dame Suzie Moncrieff but with growth in mind, moving the event north to the bright lights of Wellington was a choice that needed to be made.

“We needed larger audiences and access to more infrastructure for the production and we needed more access to talent. It wasn’t a decision we made lightly.

Moncrieff now considered the city “intrinsically linked” with WOW, with creative and technical collaborations “within every corner of Wellington.”

“Whilst Nelson nurtured and helped grow the event, and is where our museum and the permanent collection is based, Wellington has embraced it as its own.’

About 70 per cent of the show’s audience came from outside of Wellington, proving just how much of a drawcard the show is for the city.

“They love how Wellington shines for WOW and that from the moment you touch down at the airport wherever you look you see retailers and hospitality outlets [are] celebrating WOW.”

While pleased that New Zealand, in general, was thriving from an arts perspective, Robertson said the sheer concentration of organisations and groups in a relatively small city was “what made it all happen”.