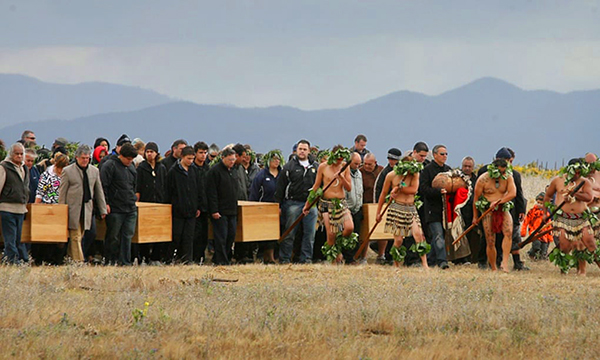 Members of the Rangitāne o Wairau tribe in New Zealand conduct a ceremony to repatriate the stolen remains of their ancestors. Photograph: Supplied.

In 2009, Āwhina Twomey received a phone call from a friend and member of her Rangitāne o Wairau iwi (tribe), asking if she could be in the South Island by 4am the following Saturday. She baulked at the early start, but then she heard the reason: Canterbury Museum had agreed to repatriate her tūpuna (ancestors), or kōiwi tangata (ancestral remains) to her iwi.

It had taken the iwi 60 years of battling the museum, and now their ancestors were coming home.

A group of 30 representatives from the iwi made the trip to Canterbury to receive their tūpuna that April, and took them back to the Wairau bar, at the top of the South Island for burial. The bar is considered to be one of the oldest archaeological sites in New Zealand, with early remains radiocarbon-dated back to 1300CE. There, against the backdrop of the ocean and the sound of waiata (song), their tūpuna were laid to rest in the place where European settlers had unceremoniously dug them up in 1949. 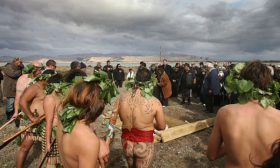 Members of the Rangitāne o Wairau tribe in New Zealand conduct a ceremony to repatriate the stolen remains of their ancestors.

“It was an honour, it was moving, but it was also sad, of course,” she said.

It was the first time a formal agreement had been reached between a cultural institution and iwi over the repatriation of ancestral remains. 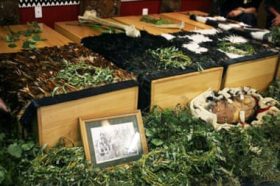 Boxes containing the remains of Māori stolen by European settlers in New Zealand.

At the time, Twomey was one week into her new job as a Māori educator at Whanganui Regional Museum, north of Wellington. She began wondering whether her own workplace held kōiwi tangata. Discovering that it did, she felt compelled to establish a set of guidelines for how those remains should be returned. Importantly, she wanted to rectify some of the mistakes Canterbury Museum had made.

That included ensuring the museum proactively approaches iwi about their tūpuna and that iwi lead the process of reburial.

“What iwi wants to do, we will listen. We will just show up with the tūpuna,” Twomey said.

A global repatriation movement is now forcing cultural institutions around the world to challenge their notions of possession. In recent years, European museums have fielded requests from Egypt, Italy, Chile, Australia, Canada and Gibraltar, among others.

New Zealand, like all colonised countries, has a dubious history with stolen and traded indigenous remains.

From 1769 to the 1970s thousands of ancestral remains of Māori and Moriori, the indigenous people of the Chatham Islands, were treated as tradable commodities, curiosities, and objects of scientific interest. The trade in toi moko (tattooed mummified heads) peaked between the early 1800s and 1820s. 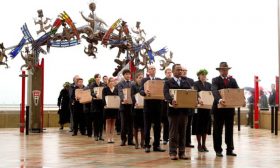 A Maori ceremony at Te Papa Museum in Wellington in 2012. The repatriation team carries 20 Maori mummified tattooed heads (toi moko) that were taken to Europe in the 1700s and 1800s. Photograph: Marty Melville/AFP/Getty Images.

But since the 1970s, New Zealand has a strong record of requesting those remains back from overseas. The first major international repatriation of a toi moko happened in 1985, more than 100 years after Austrian naturalist Andreas Reischek sent it to Vienna. That project was led by the late Māori queen, Dame Te Atairangikaahu, museum directors and politicians.

It was not until 2003 that New Zealand created its first government-funded international repatriation program: Karanga Aotearoa. It has now seen the return of 800 Māori and Moriori remains.

When a repatriation bid from overseas is successful, the remains are returned to Te Papa Tongarewa, the national museum in Wellington, and held in a wāhi tapu – a sacred space for holding the dead.

“While kōiwi are resting here, we confirm provenance to the iwi around the country and then we start having conversations. The intent is to return them all to where they came from,” the project’s lead Te Herekiekie Herewini said.

That process can be bittersweet for iwi, he said, because many were not aware their ancestors had been stolen, nor that they were frequently stolen by settlers who had formed close relationships with their communities.

“I don’t think many New Zealanders, including Māori, realise the depths of what happened here.”

When he started the role in 2007, the attitudes to human remains from overseas institutions were “possession is nine tenths of the law”, but he is now seeing a shift.

“Part of that is the influence of indigenous people, such as in Canada, the US and Australia. But part of it is New Zealanders and Australians are being brought up with a better understanding of biculturalism. When they go to Europe and Northern America, they become quite influential and work in museums overseas.

“They have new-school thinking.”

But until recently, the process to get domestic institutes to deal with their own legacy with the same sense of urgency has been slower.

“There has been some amnesia in New Zealand,” he said.

Prior to this year, it was mostly up to individual institutions to set their own policies around kōiwi tangata repatriation, guided by the Treaty of Waitangi, New Zealand’s founding document signed by more than 500 Maori chiefs and the British Crown, as well as domestic burial laws and UN declarations on the rights of indigenous people. In general, it was up to institutes to work in good faith.

But in June, Museums Aotearoa, the umbrella organisation for roughly 180 museums in New Zealand, adopted a national repatriation policy for kōiwi tangata and taonga (treasure). It sets out best practice for holding, caring for and returning remains. Some of the policy is informed by Āwhina Twomey’s guidelines for Whanganui Museum. 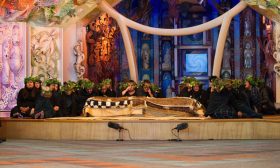 Members of The Tainui Waka Alliance tribe weep as they welcome 20 Maori mummified tattooed heads (toi moko) that were taken to Europe in the 1700s and 1800s, during a ceremony at Te Papa Museum in Wellington. Photograph: Marty Melville/AFP/Getty Images.

Those leading the policy, as has been the case with repatriation efforts more broadly within New Zealand, are predominately Māori.

Dr Amber Aranui is the curator Māori at Te Papa, and former lead of the Ngākahu National Repatriation project, a group set up to research and support domestic repatriation.

Where they are buried is important because it connects us to the whenua (the land). Dr Amber Aranui

Her domestic repatriation efforts stem from a desire for New Zealand to “clean up its own backyard first”.

With support from the Ministry of Arts, Culture, and Heritage, Aranui began researching New Zealand’s own collections. In 2018, she surveyed domestic institutions about their collections of Māori and Morirori ancestral remains, eventually discovering they held at least 3,300 sets with 78% Māori or Moriori.

She and her team began work on a set of guidelines but, feeling that it deserved more serious consideration, they began pushing for it to be adopted as a formal policy.

It marked something of a turning point in the national attitude towards ancestral remains.

For Māori, the past is very much linked with the present, Aranui said, and that includes ancestors.

“Ensuring they are protected and in the place where they should be is very important for us, because that is our identity. Where they are buried is important because it connects us to the whenua (the land).”

There is still some resistance to change from anatomy departments and DNA research institutions.

“It’s really interesting, this science versus culture argument around what is the right thing to do. But if you don’t have ethical consent and the remains aren’t obtained ethically, you don’t have a leg to stand on. We’re in 2021 now and looking at things differently.”

Āwhina Twomey said people need to ask themselves whether they would like their grandparents or ancestors disturbed from their resting place.

“These are people, they are human.”