You are here: Home » Articles filed under: 'News' » Article: 'NZ signs up to protect culture and heritage in war'

NZ signs up to protect culture and heritage in war

A bill that gives effect to New Zealand’s international obligations to protect cultural property from destruction or theft in times of war was passed by the House at the end of last year.  The Cultural Property (Protection in Armed Conflict) Bill strengthens the current operational practice of armed services personnel overseas with respect to protecting cultural property in war zones.  The bill make acts against cultural property such as vandalism or attacks during times of armed conflict an offence, and makes the removal of cultural property from occupied territory and dealing in such property criminal offences.

“This bill reinforces New Zealand’s role as a good international citizen by fully joining us up to the system of international measures to dissuade would-be traffickers of stolen cultural goods,” Arts, Culture and Heritage Minister Mr Finlayson said.

“While there may seem to be little likelihood of New Zealand being the subject of armed attack by another nation, listing significant cultural property to be protected is an important function of the Convention,” said Mr Finlayson.  “Cultural property” under the bill includes important cultural heritage as well as the buildings in which it is held. For example, major museums, art galleries and libraries, nationally important archives and scientific collections, and registers of births, deaths and marriages, land information, citizenship and protected objects.

In New Zealand, category 1 historic places and registered wahi tapu are also likely to be included, along with the list of national historic landmarks currently being considered by the government. 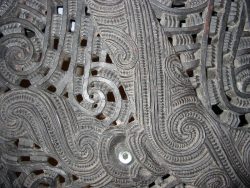 Carving from the stern of a 19th century Maori war canoe (waka taua), Auckland Museum. Picture: Wikimedia Commons
Positions Vacant » View All
» Head of Engagement – MAGNT
» Exhibitions Manager – MAGNT
Latest News » View All
National Programs Manager – Questacon
About the team Questacon – The National Science and Technology Centre has a vision for a better future for all […] Read more.
Miyoshi Mononoke Museum
Japan's largest Yokai collection Read more.
Mirka at the Jewish Museum of Australia
- a new era for the Jewish Museum Read more.
A perspective on recruiter experiences
- good & bad, & what to consider Read more.
CM appoints new Head of Collns & Research
Head of Ops and Head of Public Engagement Read more.
Top +
Council of Australasian Museum Directors, c/o Ms Daryl Karp, Museum of Australian Democracy at Old Parliament House PO Box 3934 Manuka, Australian Capital Territory 2603 Australia, © CAMD 2021
Copyright: All information and resources provided on this website remain the copyright of the Council of Australasian Museum Directors. Permission is granted for viewing and downloading for personal and not for profit purposes. Those wishing to reproduce any materials for commercial, educational or other uses are requested to contact us.
Disclaimer: The content of this website is provided for information purposes only and is not intended as a substitute for professional advice. No claim is made as to the accuracy or authenticity of the content of the website. The Council of Australasian Museum Directors does not accept any liability to any person for the information or advice (or the use of such information or advice) which is provided on this website. The information on our website is provided on the basis that all persons accessing the site undertake responsibility for assessing the relevance and accuracy of its content. No responsibility is taken for any information or services which may appear on any linked web sites. Hostgator.
.