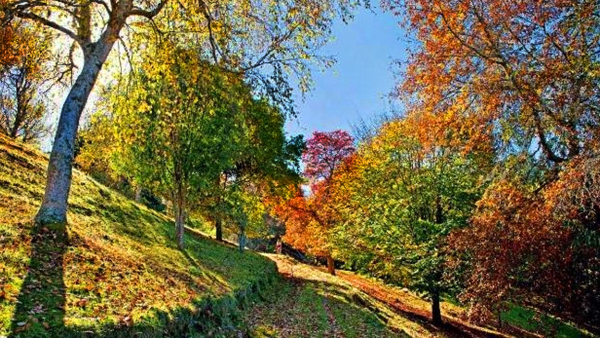 Hackfalls Arboretum is also home to over 3000 species and varieties of alders, cherries, magnolias, maples and more. Photo: Tessa Chrisp.

He was one of New Zealand’s great plantsman: founder of Hackfalls Arboretum near Gisborne, on the North Island, and curator of one of the largest collections of Mexican oaks in the world.

In 2012 he received a lifetime service award from the International Oak Society; in 2015, a Veitch Memorial Medal from the Royal Horticultural Society.

“You want to know my favourite tree?” he says. “Quercus insignis is the one that’s more interesting than most. It’s a type of Mexican oak. Rather rare. Notable for having the largest acorn in the world.” 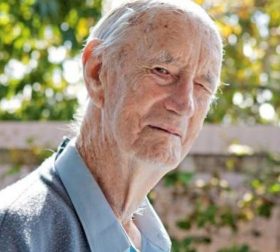 Bob Berry, 102 years old, wants to show me. He opens a slightly shaking left hand, fingers long and slender, then slowly furls it back into a ball. “It’s huge,” he says, proffering a fist. “Almost apple size. And I find that quite… remarkable.”

Sensing the constraints of my imagination, he decides I must see one for myself. Only problem is that we’re in his sitting room at the Kiri Te Kanawa Retirement Village in Gisborne, his home with wife, Lady Anne, for the past decade. And there’s another thing: “I can’t see very well,” he says. “It’s a little frustrating.”

He calls out to Lady Anne, nearly 99, a couple of steps away in the kitchen. She doesn’t hear him. Bob sighs.

But a few moments later, Lady Anne pootles over, a perfectly brewed cuppa on her walker tray for her guest.

Lady Anne, daughter of the last Earl of Orford, smiles, and of course you’re smitten. Her voice is straight from the Queen’s Christmas message, the posture still good, the manners impeccable.

“Now what can we do for you, dear? Where shall we start? Hackfalls? I take it you’ve seen Bob’s book?”

Up again on the walker, over to the bookshelf and back (an aside: no-one steers a walker with such grace as Lady Anne).

The book, The Hackfalls Arboretum Catalogue, is an astonishingly detailed 400-page hardcover opus that covers the entirety of Bob Berry’s collection. Perhaps 7000 trees – he doesn’t know the exact number – from 3500 individual species, all meticulously catalogued.

An incredible labour of love, I suggest.

Not really, Bob says, more a methodical register of his work – the slow evolution of the 56-hectare Hackfalls Arboretum that began in the 1950s, back when he took over the family’s 800-hectare sheep and cattle farm at Tiniroto, a one-tavern town halfway along the back road between Gisborne and Wairoa.

His first trip to Mexico, a kind of scouting mission, was in 1981. Five more followed over the next decade, including a foray to Veracruz in 1989 where he found his Insignis acorns.

I’m surprised. When you think of Mexico you think of cacti and deserts – not oaks, this most quintessentially English of trees.

Not so. “Up in the hills,” Bob explains, “it’s rather mountainous. That’s where you find the forests.”

In fact, Mexico has a higher percentage of forest cover than New Zealand – and the greatest oak diversity in the world. Of the 425 known species, 165 are in Mexico.

“There was a window of opportunity and I managed to grab it. When air travel became affordable, you’d do a quick trip, hire a driver or a car. You’d go whizzing round the place and come back again. In a few days you could do what these other fellas, just the generation before, took months to do,” he explains. “I got in just in time. And then the authorities clamped down on us.”

“The authorities? Do you mean in Mexico or New Zealand?”

“The ones behind the desks at the airports.”

“I’m assuming you brought acorns back?”

“Of course. We’d have a little expedition and come back with all these seeds. But then they got in a bit of a panic. Because they were biosecurity, not botanists. They didn’t know what was safe and what wasn’t. Acorns are harmless, but you couldn’t tell them that.”

That window was fast closing. Bob would bring his acorns back in a bag, hand them over to be fumigated, drenched with chemicals. Whatever survived would then have to germinate under quarantine.

“A friend told me later that it was a good idea to give them a big bunch right at the start, but keep a few in your pocket just in case. Because they killed off so many.” Mischief in a more innocent age.

Did Bob ever outwit Her Majesty’s customs officers? He’s not saying, but there’s a soft chortle disguised as a cough. And then just the barest trace of a smile.

The drive to Tiniroto from Gisborne takes an hour, mostly uphill at first, then a tight wind along the Hangaroa River Valley. Fifty kilometres in, a sign to Hackfalls: take a right turn at the Tiniroto Tavern, then drive along a poplar-lined farm road for a couple of kilometres.

You’re here. Even in winter, largely leafless – even at what I’m told is the worst time – it’s a starkly beautiful place. Ten-hectare Lake Karangata is the centrepiece, ringed with 1000 trees. But since we’re high up, about 300 metres, you can see past it for ages.

And so you stand here, mesmerised, taking it all in, for five minutes, more. After a while, you hear the silence, no sound at all, save your breathing. Nothing until the putt-putt-putt of your host’s quadbike. “You’ve picked a perfect day to come,” she says. “Jump on. We’ll go for a ride.”

Diane Playle, Bob’s niece, has managed the farm since 1984, the last 12 years in sole charge after husband, Kevin, was killed in an accident.

Warm, quietly-spoken, she tells me more about the farm – up to 1000 hectares now, with 900 cattle and 3200 ewes – as we meander through the forest. Giant redwoods. A magnolia, her favourite (“it usually flowers around docking time”). A copse of oaks with an amusing back story. “Uncle Bob picked these up on one of his Mexican trips. Apparently, the rest of the group wanted to head off to Acapulco, but Uncle Bob was firm: ‘No. We’re here to collect seeds!’”

Up near the farmhouse, another oak, the oldest on the property, planted by Bob’s mum to celebrate King George V’s jubilee in 1935. Born, so the legend goes, of an acorn from the Windsor Great Park Collection. It was also the lone oak on the property for two decades.

“My grandfather wouldn’t allow Uncle Bob to plant any exotic trees, other than pine and eucalyptus,” Diane explains. “He was a farmer at heart, whereas Uncle Bob really wasn’t. I mean, Uncle Bob had good stock sense – but it’s not where his heart was. He was a tree man. Trees and the navy – he always wanted to join the navy.”

It must’ve been grindingly hard to spend decades locked to the land, doing your duty, unable to even plant a tree. It’s something I pick up with Bob back at Kiri Te Kanawa the following day.

“My father said he didn’t mind me planting a tree, so long as it was useful. For him, a tree was timber,” Bob says. “He wouldn’t have approved of what I’ve done. It took a few years after he died before I really got going. But he would have been astonished at the fact that the farm is now known worldwide.”

Bob straightens up in his chair. He looks… well, he looks stubborn as hell. A man vindicated.

It doesn’t matter that he hasn’t been to Hackfalls since his hundredth birthday. He knows all his trees. Diane told me how you could walk around with him, and he could tell you each tree, where it was from, when it was planted, without reference to its tag. That’s some memory indeed.

It’s some vision too. And I tell Bob the story of a shearer I met who’d had a midlife epiphany and planted 100,000 trees on Great Barrier Island. How do you build a forest? I’d asked the shearer. “It’s easy,” he said. “You just have to think like God.”

But Hackfalls has flourished so spectacularly there has to be magic somewhere. Bob, have you ever had a Prince Charles word with any of your trees?

“No! I didn’t talk to trees or hug them or any of that sort of thing. I’m strictly scientific.”

“But you love them?”

“Surely you see their beauty?”

“Well hang on. You mean… to look at? Or to be interesting? They’re two different things. The priority is different.”

And his favourite season at Hackfalls?

“Early May, I suppose, for the autumn colour. Spring, of course, is spread longer but autumn is more intense. The rhododendrons, the magnolias, the azaleas…”

Bob’s voice tapers off. He looks at Lady Anne for several seconds, a small smile forming. Then: “I should like to see one more autumn.”

This story was first published at Stuff.co.nz