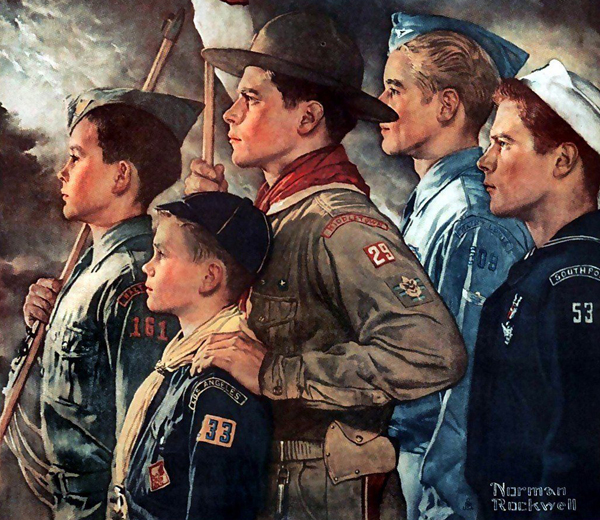 Norman Rockwell, Forward America (1951),. The illustration was made for the Boy Scout calendar. Image courtesy of the Boy Scouts of America.

Sarah Cascone, An Ohio Museum Was About to Show the Boy Scouts’ Collection. A Looming Bankruptcy and Abuse Scandal May Nix the Show, ArtNet, 30 January 2019

Allegations of child sex abuse have been leveled against the Boy Scouts, and now an Ohio museum is reconsidering its ties to the organization.

The Butler Institute of American Art in Youngstown, Ohio, is having second thoughts about hosting an exhibition of 300 artworks worth $130 million, including around 70 paintings by Norman Rockwell, from the collection of the Boy Scouts of America.

After two years of negotiations, the show was thought to be a done deal. The museum would pay to transport the works and the Boy Scouts would waive a $100,000 fee for the loan (which was never to be a donation, as some media outlets misreported). Everything had been arranged thanks to Butler trustee Ned Gold, an attorney who has been involved with the Boy Scouts for over 70 years.

But in December, an article in the Wall Street Journal reported that the Boy Scouts might be forced to declare bankruptcy in connection to allegations of child sexual abuse. Spooked, the museum board voted to delay finalizing the arrangements with the Boy Scouts and to revisit the proposed exhibition in a year’s time.

“We’ve worked very hard here to maintain a solid presence in a conservative community like ours,” Butler executive director and chief curator Louis Zona told the Associated Press. “We’re very proud of our reputation. Could it have been hurt by this? I don’t know.”

The mechanics of the bankruptcy are also of concern, as the collection could possibly be seized as an asset during proceedings. That could mean an abrupt end to the exhibition, should the Boy Scout’s financial woes lead them to declare Chapter 11 bankruptcy.

“The Butler trustees discussed at length the pros and cons of the arrangement with the [Boy Scouts], including all that would be involved with a possible quick return of over 300 paintings and the burden it would place on our staff,” said Thomas J. Cavalier, the museum board’s president, to the Vindicator, a local newspaper. “The Butler board of trustees carried out its fiduciary responsibility to protect the interests of the Butler and voted overwhelmingly to delay any arrangement with the [Boy Scouts] involving their art collection at this time.”

But Gold, among the Butler trustees, remains convinced the museum is making a mistake. “We’re going to lose a $130-million collection that would bring people from all over this part of the country,” he warned the Vindicator. “The benefits to be reaped are immense,” he said.

The possibility of exhibiting the Boy Scouts’s collection of works by the great illustrator was raised following the decision in 2016 to close the Boy Scouts’ museum in Irving, Texas. The museum, which owns some 600,000 scouting-related artifacts, reopened last September in Cimarron, New Mexico.