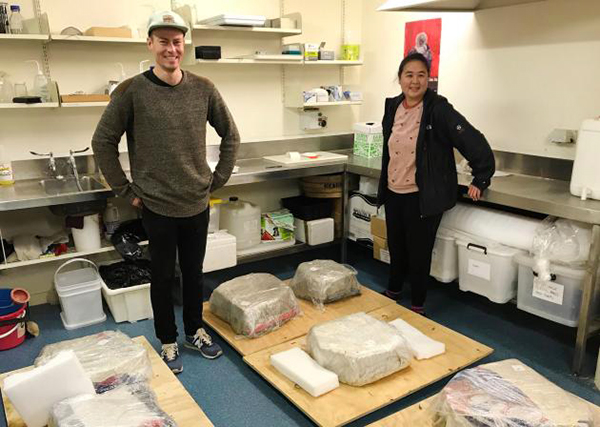 After Otago Museum staff recently helped extract ancient moa footprints from the Kyeburn River, in the Maniototo, museum conservation manager Nyssa Mildwaters outlined to reporter John Gibb what the museum’s plans are for drying out and protecting the footprints at the museum in the coming weeks and months.

After ancient moa footprints are found, many more steps must be taken.

Early last month, a scientific team from the Otago Museum and University of Otago removed six moa footprints from the Kyeburn River, in Maniototo, which had been found by Ranfurly man Michael Johnston.

Regarded as a world-class discovery, the six prints, each about 30cm by 30cm, are the first known moa footprints in the South Island.

The footprints, likely to be at least a million years old, and perhaps considerably older, have now been brought to the museum for safekeeping and eventual display.

Museum director Dr Ian Griffin said they might also be the oldest moa footprints found anywhere in the country.

Museum conservation manager Nyssa Mildwaters said the museum was in the process of planning the imaging, documentation and conservation of the prints, including how to make the process accessible to the public while still making sure the prints were protected and conserved to the best of its ability.

The imaging and documentation included a combination of a range of techniques including digital photography, photogrammetry, laser scanning and CT scanning, she said.

The stone blocks would be imaged thoroughly in the next few weeks before the drying process began, so there were very good records of the prints and blocks in as near pristine condition as possible.

No fans were being used to dry the rock and footprints out at this stage, and museum staff were aiming to dry the blocks out in a controlled and even manner.

It was likely that conservation staff would use enclosures to allow them to control the reduction in moisture and it was hoped to avoid cracking as far as possible.

The footprints were on pallets, close to the ground, because they were relatively heavy, and they remained easily accessible to museum staff.

They were now in a collection work area, but would be moved to a conservation space in coming weeks.

Asked how long drying work would take, Ms Mildwaters said they just did not know at the moment.

“Given the rarity of the prints, we don’t want to rush things and are keen to take our time and make sure we do the best job possible.”

Asked why the process took so long, she said there was a lot of moisture present.

“We want to allow the blocks to dry evenly and slowly to reduce the likelihood of cracking, though we may not be able to avoid it completely.”

Museum conservators had to be careful with the footprints, and the substrate was very soft and easily damaged.

“We want to keep the prints as pristine as possible.

“After they are dry we will image/document the block again and we will begin the process of designing and creating customised mounts of the blocks so that they can be moved and displayed as safely as possible.”

Asked if the actual footprints would be on display in the end, rather than casts, Ms Mildwaters said the project was still in its early stages and final plans had not yet been agreed.

Nevertheless, the museum is working towards the goal of having the actual prints on display for the public.

Asked if there would be a special display for the prints, she said a new display would require further planning and funding.

Imaging data gained from imaging the stone blocks would be used to make models of the prints, and physical casts might be taken once the prints were dry if they could do that without the risk of damaging them.

There were no plans to cast the prints while they were wet because they were concerned about damaging them, she said.

Casts could be made for many reasons, including research and educational/outreach purposes, to allow those unable to visit to see the prints to get a sense of them.

Other reasons included allowing those with visual impairments to share the experience of visiting the prints as they could handle the replica.

Casts also allowed items too fragile to be displayed to still be seen by the public or to allow other institutions to communicate the story of the items even though the originals were not in their collections, she said.