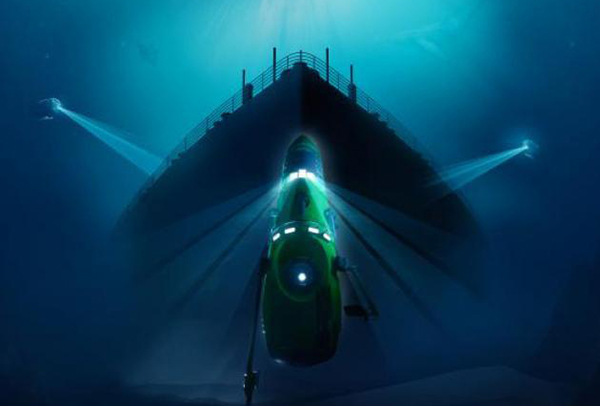 An image of a sunken ship from the “James Cameron – Challenging the Deep” exhibition. Photo: Australian National Maritime Museum.

Prepare to be immersed in the depths of our oceans.

In what is a major coup, Otago Museum has secured New Zealand exclusive rights to host the “James Cameron – Challenging the Deep” exhibition, on the first stop of its international tour.

Best known as the director of Hollywood blockbusters such as Titanic and Avatar, the 64-year-old Canadian is also an environmentalist, deep-sea explorer and philanthropist.

Developed by the Australian National Maritime Museum in Sydney, in collaboration with the Avatar Alliance Foundation, the exhibition takes visitors to the depths of oceans through the lens of Cameron’s underwater cameras and his other technological innovations that have made it possible to explore some of the most mysterious parts of the planet.

Cameron has led eight major deep-sea expeditions and completed numerous submersible dives where he set world-firsts, including the first solo dive to the Challenger Deep in the Mariana Trench, the first exploration of the interior of the wreck of RMS Titanic, and the first seafloor-to-surface live broadcast.

His expeditions, in collaboration with oceanographic and scientific institutions, have documented the shipwrecks of RMS Titanic and the German battleship Bismarck, explored deep ocean phenomena such as black smoker hydrothermal vents, and discovered new species from the lowest point on Earth.

They have been chronicled in his documentaries, which can now be seen in the exhibition.

“With this in mind, we couldn’t resist the opportunity to inspire a whole new generation of explorers by bringing this world-class exhibition to Dunedin.

“Our city has been jumping-off point for some great voyages of exploration – Dunedin was the port of departure for Scott, Shackleton, and Byrd.”

“It is time to share it with the world, and we are thrilled that New Zealand, through our friends at Otago Museum, will be the first stop on what we hope will be a long and successful international tour.”