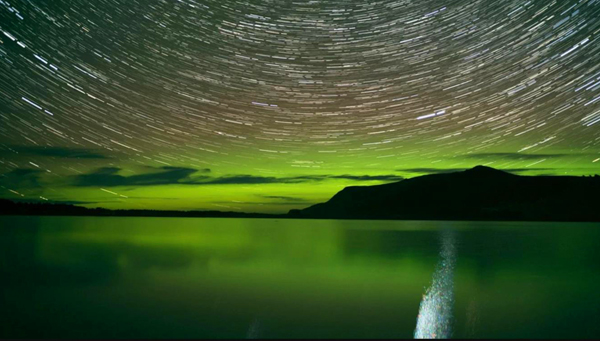 Star trails over Hooper Inlet as an aurora lights up the night sky. Photo: Ian Griffin via Twitter.

An explosive solar storm is leading to a colourful spectacle in the nights skies above southern New Zealand.

Griffin, who captured stunning images on his camera, said the dramatic night skies were the result of one of the worst geomagnetic storms in recent memory raging on the sun’s surface.

A massive explosion on a sun spot a few days ago had led to debris hurtled through space and into earth’s orbit.

“There was a really big and active storm on the sun firing off in all directions which left two to three days ago travelling between 300-600 km/sec.”

He said the first of the material struck last night and indications were it would last for a second night.

“It was fantastic the sun gave us a little party last night,” said Griffin.