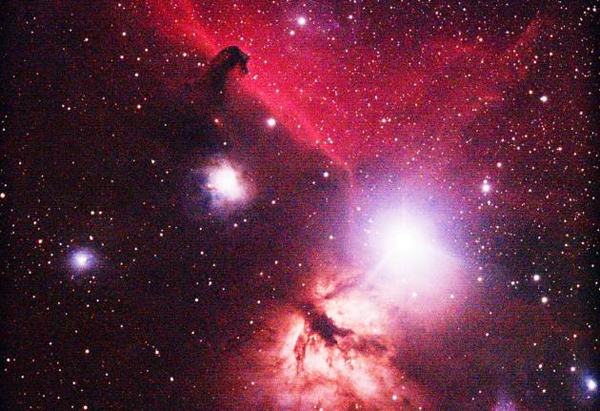 A picture of the Horse Head Nebula in Orion taken from Mount Buster Rd in Naseby. Photo: Ian Griffin.

Naseby Vision plans to submit its application to the International Dark-Sky Association in December, after about a year of planning.

To support the bid, the Maniototo Community Board last week decided to officially endorse the project.

Naseby Vision chairman John Crawford said this was an important and necessary step.

“The mayor has written a letter of support and some other groups are doing the same. We’ve got to show the wider community is on board.”

Dark Sky Community is one of five of the association’s Dark Sky Area accreditations, and is given to populated areas which show “exceptional dedication to the preservation of the night sky”.

New Zealand has two other Dark Sky Areas. The Aoraki Mackenzie International Dark Sky Reserve around Tekapo was established in 2012 and Great Barrier Island, off the East Coast of Auckland, last month gained the status of a Dark Sky Sanctuary.

The Central Otago District Council has helped by installing lights with low colour rating throughout the district in recent months. Now all but a few street lights in Naseby carry 3000K bulbs, which meet the association’s guidelines for light pollution.

Naseby Vision members are also talking to Central Otago District Council about its next district plan and how new provisions could be used to protect the area’s skies.

“That really relates to lighting in the town in a broader sense and ensuring other lights meet a certain standard. We don’t have a problem at the moment, but it’s about new buildings,” Mr Crawford said.

The idea was sparked when Otago Museum Director Dr Ian Griffin spoke at Naseby’s Ancient Briton Hotel last year about the value of Otago’s night skies. He continues to advise the community group through the application process.

The area was “excellent” for astronomy, arguably beating Tekapo in terms of its clear night sky, Dr Griffin said.

“You’ve got to remember there is a balance between development and desire for a night sky. Tekapo is an excellent location, there is an observatory there and it’s a fabulous place, but the town itself is growing and even though they’re controlling the lighting significantly, compared to Naseby there’s arguably more light in Tekapo.”

Naseby Vision has hired a part-time staff member to help with the application and purchased night-sky binoculars and light measuring equipment.

If it gained the accreditation it would raise more money for a small observatory outside the town and a permanent telescope.

Maniototo Community Board chairman Robert Hazlett said it was “fully supportive” of the idea.

“We’re behind anything that will give more to the Maniototo.”