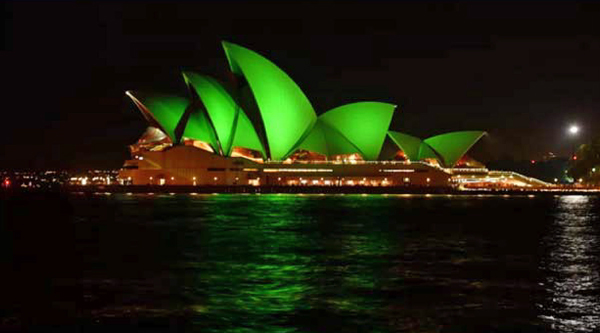 The Sydney Opera House was notoriously behind schedule on most things during the 14 years it took to build but on Monday it will be five years ahead of schedule when it meets its target to reduce emissions and become carbon neutral.

This move puts it up there with New York’s Empire State building and Paris’s Eiffel Tower as global  architectural icons which are actively working to become world symbols of energy efficiency, its Environmental Sustainability Manager Emma Bombonato said.

To celebrate the fact it has achieved certification against the Australian Government’s National Carbon Offset Standard (NCOS), its famous white sails will turn green on Monday night at 6pm. Melbourne’s Pixel building was Australia’s first carbon neutral building in 2011.

Officials at the Sydney Opera House have been working to increase its energy efficiency and decrease its waste for the past decade. In 2014 it replaced incandescent bulbs in the Concert Hall with custom LED lights to achieve a 75 per cent reduction in the venue’s electricity consumption. In 2017 it introduced a new building management control system to monitor energy and water use and manage climate control. It also optimised the heating and cooling of the building by replacing chiller units connected to the Opera House’s pioneering seawater cooling system in that same year, resulting in a 9 per cent energy reduction.

“One of the biggest benefits of changing the incandescent bulbs to LEDs, means that instead of changing them in the Concert Hall once a year, now it is needed only once every nine years,” she said.

By becoming more energy efficient and streamlining day-to-day operations, it reduced its carbon dioxide (CO2) emissions, and offset its remaining emissions for the year 2017-2018 with help from its major partner EnergyAustralia. To reduce its carbon footprint, Australia’s most recognisable building invested in renewables, tree planting and biodiversity projects to offset its greenhouse emissions. The 2015 Paris Agreement set a goal of limiting a rise in world surface temperatures, and last month the mayors of 19 cities, including Sydney, put in place regulations requiring all new buildings to be carbon neutral by 2030 and all existing ones to reach the same goal by 2050.

Each year the Opera House hosts 1800 events, serves 2.6 million food and beverage orders – producing 5000 cubic metres of waste and uses electricity equivalent to 2500 households (16 gigawatts). A new waste management program, including the introduction of new recycling streams and transferring food waste that would have otherwise gone to landfill to an organics facility to be turned into energy last year, improved the waste recycling rate from 25 per cent to 60 per cent. An educational program on waste management for staff and contractors also helped reduce waste.

“It’s the Opera House’s responsibility to find innovative solutions to reduce its carbon footprint and inspire the community to do the same,” Opera House CEO Louise Herron said.

When designing the Opera House, Danish architect Jørn Utzon was inspired by nature
and integrated features now recognised as sustainable design which included an innovative seawater cooling system that continues to efficiently power the Opera House’s main heating and air-conditioning. An early interpretation of the “chilled ceiling” design (in wide use today to reduce energy consumption) remains in the Drama Theatre to help control the venue’s air temperature.