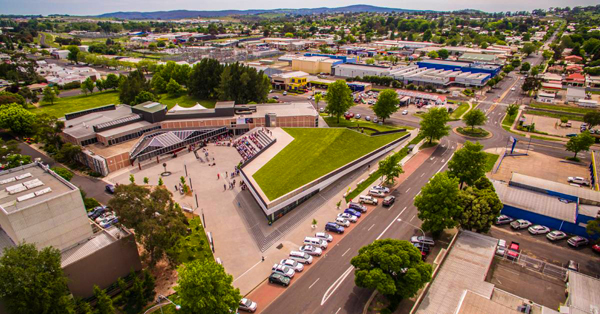 An aerial view of the civic precinct which has now won two Sulman Medals for public architecture. Photo: Supplied.

It won the Sulman Medal for Public Architecture at the 2017 NSW Architecture Awards, announced in Sydney on Saturday night.

The building was designed by Sydney firm Crone Architects.

The award jury praised the innovative structure which features a small park on the museum roof.

“This bold, large-scale intervention re-organises a whole city block through the application of a combined landscape, architectural and urban solution,” the jury said.

“Simple, bold and confident moves have created a destination for locals and visitors which provide a clear and active address to the larger civic precinct.”

Design director Niall Durney said it was the biggest prize the firm had won.

“It’s probably one of the biggest awards around you can win,” he said.

“It was our intention to produce something special for Orange.

“Our mission was to create a forward-thinking design for the Orange Regional Museum that would contribute to the community and create a new destination for the area.”

Mr Durney said he had initially planned to put the museum underground with a park on top but due to flooding issues they changed to putting the grassed area on the roof.

“The idea was to try to slot the museum underneath.

“We helped the council get the funding from the government.”

The museum beat a short-list of seven other projects, including Barangaroo South, the Wynyard Walk and the North Bondi Amenities in Sydney and the Wagga Wagga courthouse.