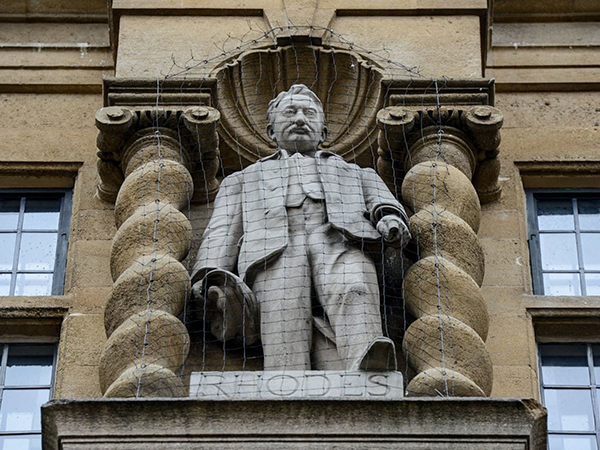 The Cecil Rhodes statue at Oriel College in Oxford.

Oxford professor and curator Dan Hicks calls the sign an “embarrassment”
A plaque installed next to the statue of Cecil Rhodes at Oriel College in Oxford describing the Victorian imperialist as “a committed colonialist” has divided academics, fuelling further the debate over contested heritage in the UK.

The plaque, erected by the college, says that Rhodes “obtained his fortune through exploitation of minerals, land, and peoples of Southern Africa. Some of his activities led to great loss of life and attracted criticism in his day and ever since. In recent years, the statue has become a focus for public debate on criticism and the legacy of colonialism.”

Campaigners from the Rhodes Must Fall group—inspired by the toppling of the Edward Colston statue in Bristol last year by Black Lives Matter demonstrators—say that the 19th-century politician and diamond mining magnate represents white supremacy and supported apartheid-style measures in South Africa. Rhodes, an Oxford student in the 1870s, left £100,000 to Oriel on his death in 1902.The King Edward Street Plaque nearby also commemorates where Rhodes lived in 1881.

Dan Hicks, a curator at the Pitt Rivers Museum and professor of contemporary archaeology at the University of Oxford, wrote on Twitter that “the Rhodes Must Fall Oxford campaign did not, from memory, call for the erection of a third college memorial to Cecil Rhodes… this small metal sign is an embarrassment and reveals the incoherence and futility of the ideology of ‘Retain and Explain’ [the UK government approach to contextualising controversial historic statues and monuments].”

But the historian Zareer Masani told The Telegraph newspaper that a balanced plaque should be put up, “possibly with fairly minimal information but presenting both [Rhodes’] flaws and his virtues. It can say he is controversial, but there are two sides to it.” A spokesman for Oriel told the Oxford Mail newspaper that the text on the sign “isn’t intended” to give a comprehensive account of Rhodes and his actions during his lifetime.

In May, Oriel College said it had no plans to “begin the legal process for relocation” of the statue of Rhodes following a report by an independent commission that recommended the college “invest in understanding and contextualisation of its relationship with Rhodes”. The commission, chaired by Carole Souter, was set up last year to assess the fate of the contentious sculpture by Henry Alfred Pegram, which stands on the façade of the Oxford University college.

The new plaque adds that “in June 2020, Oriel College declared its wish to remove the statue but is not doing so following legal and regulatory advice”. But the commission rowed back on making any firm recommendations regarding removing the sculpture.