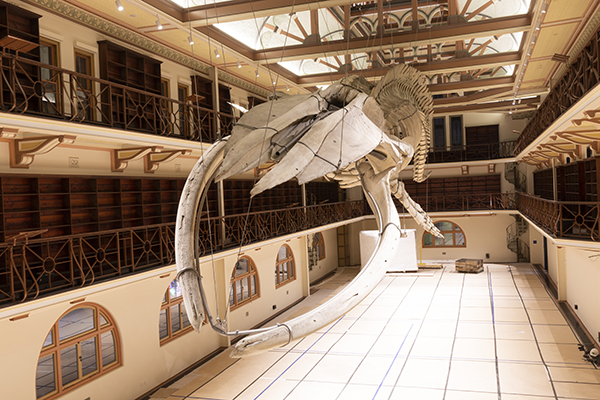 This is the first time in the world a blue whale skeleton has been displayed in such a dynamic pose, showcasing the latest research into the feeding habits of this marine mammal. They are the largest animals to have lived on Earth and the New Museum display allows visitors to walk under the skeleton and meet the blue whale at eye level.

Canadian marine skeleton specialists Cetacea worked with WA company CADDS Group to create a precision-engineered, bespoke metal frame to suspend the skeleton, which in another world first, used technology usually reserved for mining and engineering projects to design the pose and fabricate the frame, allowing the fragile 123-year-old bones to be displayed as if diving in the ocean.

The skeleton, which weighs four tonnes, was put together in sections and suspended nine metres above the ground, like a giant jigsaw.

Visitors to the New Museum will be able to walk under the entire 24-metre skeleton, and along a walkway at eye-level, giving a new perspective on the Museum’s most iconic object.

The adolescent blue whale washed ashore at the mouth of the Vasse River near Busselton in 1897 and it took three years for the Museum’s taxidermist Otto Lipfert to prepare the bones for display.

After a call for public submissions, the whale has been named ‘Otto’ in honour of Otto Lipfert and his work.

The blue whale will be the centrepiece of the Stan Perron WA Treasures Gallery. Supported by the Stan Perron Charitable Foundation, the gallery will feature significant objects, artworks and documents from the State’s main cultural collections, including the Museum, State Library, State Records Office and the Art Gallery of WA.

Premier McGowan noted “this incredible, world-class display of Western Australia’s blue whale is breathtaking – there is no other whale displayed like this anywhere in the world.

“Many Western Australians remember visiting the blue whale in its old home on Francis Street – now at the New Museum it will delight a whole new generation of locals and tourists alike.

“Free general admission for all visitors for the first 18 months at the New Museum means thousands of people will have the opportunity to experience this truly unique display.”

Minister Templeman added “The Western Australian Museum’s blue whale skeleton may be more than 120 years old, but the technology and research behind its spectacular new display is ground-breaking.

“The foresight of the Museum’s taxidermist Otto Lipfert back in 1897, collecting and preserving the skeleton for the benefit of future generations, for us and for our children, was extraordinary.

“Moving the skeleton up a beach by horse and cart to the Busselton Train Station, then packing it onto a train for Perth, where he reassembled it for public display is nothing short of incredible.

“It is entirely fitting the whale has been named in his honour.”

For more information on the New Museum go to http://museum.wa.gov.au/newmuseum