You are here: Home » Articles filed under: 'News' » Article: 'Oudolf Hummelo: Piet Oudolf at home with' 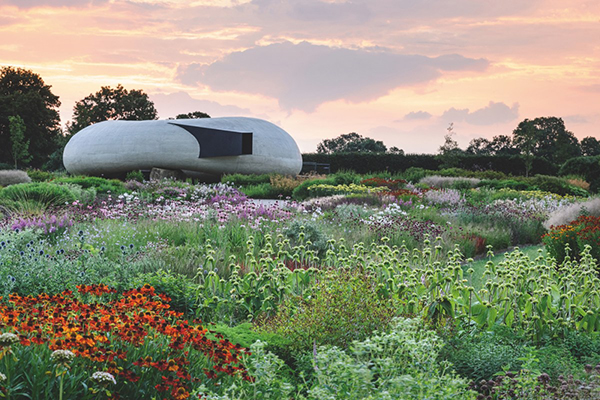 Piet and his wife Anja purchased an old farmhouse in the Netherlands, transforming it with many experiments in landscaping.
by Sarah Rose Sharp.

Dutch landscape designer Piet Oudolf is internationally famous for his garden installations — from the UK to mainland Europe, to the High Line park in New York City. Now, as winter descends upon the Northern hemisphere and gardeners close their beds and open their minds to new sources of inspiration for the coming season, a book from Monacelli Press takes a deep dive into Oudolf’s most personal garden: Hummelo. 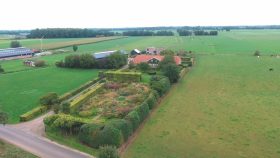 An overview of the Hummelo property in the Netherlands (Image by Arjan Otten).

Co-written by the titular plantsman and Noel Kingsbury, Oudolf Hummelo (2021, Monacelli Press) captures work that began in 1982, when Piet and his wife Anja purchased an old farmhouse outside the eastern Netherlands village of Hummelo, and moved there with their two sons. In the intervening decades, the place has been the site of personal experiments in landscaping, as well as the nursery that enables the cultivation of many of Oudolf’s signature flowering perennials. As an influential member of the Dutch Wave and New Perennial Style movements, Oudolf’s focus on ecological systems and the structural possibilities of year-round perennial cycles and native grasses emphasizes knowledge of plants, long term gains, and landscapes that reveal depth and showcase organic geometries — rather than relying on showy, short-term blooming seasons or outrageous walls of color. 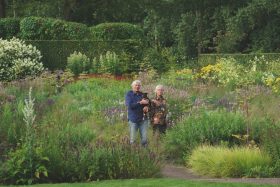 Piet and Anja in Hummelo (Image by Rick Darke). 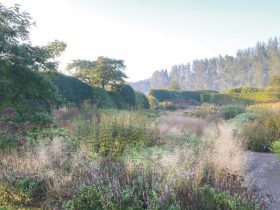 The book mirrors this array of interests, including a detailed history of Hummelo and the Oudolf family’s efforts to develop the property into a landmark garden and nursery. It also boasts micro-essays on notable interlocutors and influencers to the Oudolf style, including Mien Ruys, Ernst Pagels, and Henk Gerritsen, and details about the plants themselves, including a list of favorites from Anja, who eventually assumed responsibility for managing the nursery.

But most of all, there are images. Hundreds of pictures of Hummelo, from early days on, including intimate details of life on the property that seem to substantiate the farm-bohemian aesthetics of the Oudolfs’ professional reputation; a small white dog scavenges atop a picnic table, exploring the dregs of an emptied wine glass. There are sections rife with images and details on some of Oudolf’s major projects, including the High Line; the Trentham Estate (where he created a lush, perennial take on the traditional hedge labyrinth); and an installation-in-progress at the Belle Isle Conservatory garden in Detroit, Michigan — to name just a few that show his range as a designer, plantsman, and landscape-whisperer. 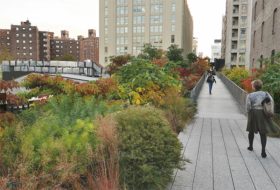 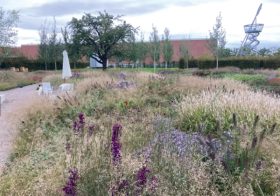 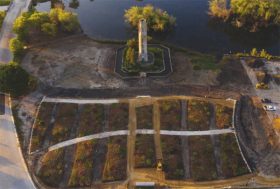 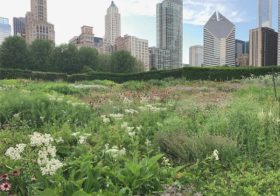 Oudolf Hummelo: A Journey Through a Plantsman’s Life is exactly the right kind of book for the winter season, whether the goal is to examine an influential figure in landscape design, bulk up on perennial knowledge, or simply revel in images of the growth of a garden through decades of seasonal turns. For lovers of landscape architecture, Dutch Wave aesthetics, and gardens alike, there is much inspiration to be found in its pages. 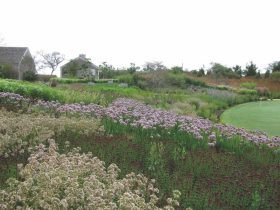 Oudolf Hummelo: A Journey Through a Plantsman’s Life by Noel Kingsbury is published by Monacelli Press.