You are here: Home » Articles filed under: 'News' » Article: '‘Our income vanished’: Australia’s' 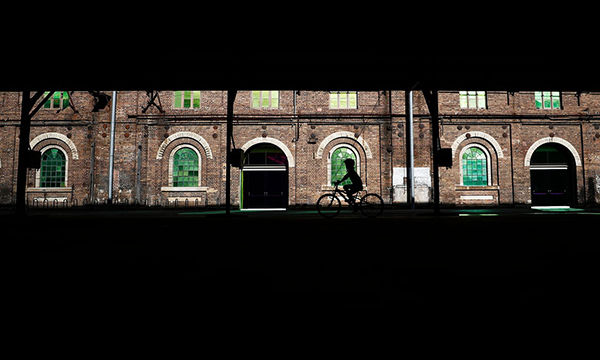 Elissa Blake, ‘Our income vanished’: Australia’s galleries and museums buckle in Covid-19 storm, The Guardian, 7 May 2020

Carriageworks is only the first major casualty in what arts leaders say will be a string of closures without ‘enormous action’.

The announcement on Monday that Sydney’s Carriageworks had entered voluntary administration came as a shock for an arts community already in brace position.

“It’s the first big announcement like this but I can tell you now, it won’t be the last,” says Esther Anatolitis, executive director of the National Association of Visual Arts. “What we’re seeing right across Australia is a total loss of self-generated income for galleries. As yet, there’s no strategy looking at how to financially support galleries so that they will be able to survive and reopen.”

Carriageworks has been one of the jewels of Sydney’s performance and exhibition venues since 2007, hosting some of the largest-scale art installations seen in Australia at its historic 50-hectare site at the Eveleigh rail yard complex. It served as a hub for festivals and provided a home to leading arts companies. 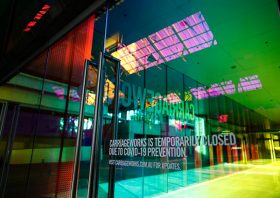 A closure sign on the door of Carriageworks on Tuesday. Photograph: Ryan Pierse/Getty Images.

The organisation had its income projections for the current financial year trashed as the coronavirus crisis unfurled, with big-ticket events cancelled or suspended. The decision to enter into administration was sealed when the New South Wales government – which currently does not have an arts minister after the recent resignation of Don Harwin – declined to guarantee future funding. Rumours are swirling about a possible takeover of the venue by the Sydney Opera House.

But Carriageworks’ exposure to commercial headwinds is no greater than many others in the sector, says Anatolitis. The Covid-19 shutdown has come hard on the heels of cuts to Australia Council funding and a summer of bushfires that had an impact on gallery attendance and operations, most notably in Canberra.

All galleries Australia-wide are closed until further notice. Most if not all are taking considerable financial hits while continuing to manage multimillion-dollar collections and maintain a level of community outreach.

Regional galleries have been hard hit by drought, fire and the resulting loss of tourist traffic. “There’s barely been time to recover from that and now we have a global pandemic for which there is no treatment and no vaccine,” Anatolitis says.

Sydney’s Museum of Contemporary Art has accessed the jobkeeper scheme in order to maintain its staff, says its director, Liz Ann Macgregor. 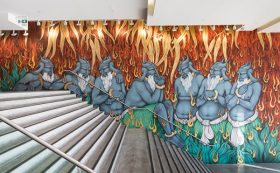 Khadim Ali’s The Arrival of Demons, 2017, at the Museum of Contemporary Art in Sydney. Photograph: Ken Leanfore/MCA.

“It’s been a lifeline,” she says. “I can’t even begin to tell you of the scenarios we were working through before jobkeeper was announced. All I can say is that they were truly horrible.”

Government funding accounts for about 25% of the MCA’s budget, says Macgregor. The rest comes from venue hire (including weddings and corporate events), the museum’s retail and café operations, and philanthropy. Apart from special exhibits, the MCA does not charge an entrance fee.

“That was our much-lauded funding mix,” Macgregor says with an exasperated laugh. “And before this crisis, everyone thought that was a great thing. Even the GFC didn’t impact us very much. But this time, 40% of our income vanished overnight. It throws into question the whole orthodoxy of that kind of funding. Those of us who developed really good business models are particularly suffering, much more so than the institutions who get 60, 70, 80% of their funding from government.”

The MCA’s philanthropic community has been supportive. “Actually, they’ve been fantastic, telling us that they understand we can’t use the money in the way we wanted to but to please spend it to keep the museum going,” Macgregor says, adding that she has ruled out bringing back an admission fee for the MCA. 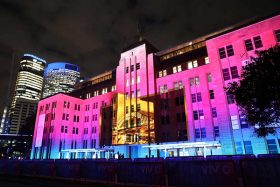 ‘Virtual Vibration’ is is projected onto the facade of the MCA during a media preview for Vivid Sydney in 2018. Photograph: Mark Metcalfe/Getty Images.

As it stands, access to the jobkeeper scheme is not an option for Australia’s local council, university or state-owned institutions.

“Our permanent full-time and temporary staff continue to work behind the scenes while our doors are closed to the public,” says Michael Brand, director of the Art Gallery of New South Wales. “During this period we have also sought to retain and redeploy a number of our regular casuals within the gallery.”

Adelaide’s Art Gallery of South Australia is in a similar position.

“We’re doing all we can to look after our small number of casuals, some of whom are assisting us to deliver our online programs,” says Rhana Devenport, AGSA’s director, adding that permanent and contract staff had been asked to exhaust all leave entitlements.

Like all arts and entertainment enterprises, Australia’s art galleries are keenly awaiting updated advice on social distancing. Galleries, says Anatolitis, are in a far better position to reopen in the next few months than theatres and concert venues. 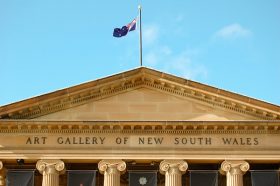 “Galleries are, almost by definition, controlled environments. We can absolutely control the number of people in a space and when we walk into a gallery we don’t generally stand close to other people because art demands, quite often, a deep and solitary response.”

Until physical reopening is permitted, galleries and museums nationwide are increasing their digital footprints in order to maintain connections with their communities and artists. The MCA has a virtual tour of its Sydney Biennale exhibition, the Art Gallery of NSW has Together in Art, and the National Gallery of Victoria has virtual tours, including jumping early on digitising its blockbuster Haring/Basquiat (resulting in more than 50,000 online views so far), and the AGSA has a raft of podcasts and talks around 2020 Adelaide Biennial of Australian Art: Monster Theatres. 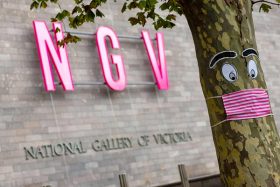 A tree wears a face mask outside of the National Gallery of Victoria in Melbourne. Photograph: Speed Media/REX/Shutterstock.

Devenport says despite AGSA expanding further into digital, there is much more to be done in what is “an extraordinarily challenging time”. She says what’s needed now is a political strategy that puts the arts at the centre of the population’s long-term wellbeing.

Brand agrees: “Art museums will have to play a greater role than ever to support and assist our art communities to survive the pandemic, recover, then thrive again in the long term. This will require enormous action. Some of our initial actions now might be quite small in scale but they will set the tone for what will follow.”

Macgregor believes it is important to keep art galleries and museums afloat for economic as well as cultural reasons.

“When all this is over, there is going to be a huge growth in domestic tourism and galleries and museums are real drivers in that market. [State] borders are going to open again and all those people who normally go overseas and spend money – something like $6bn – are going to be here and we want to grab some of that, but the museums are going to have to work together,” she says.

“Cultural tourists spend three times as much as other tourists, so for the sake of the economy, we need a stimulus package that will allow organisations like ours to reopen.”