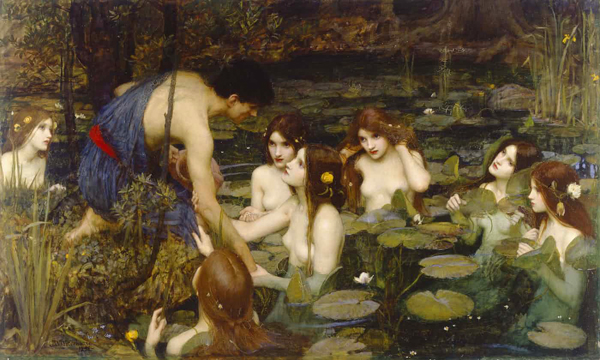 Hylas and the Nymphs, by John William Waterhouse. ‘What is beautiful to some people may appear to others to represent a problematic and pejorative system.’ Photo: Courtesy Manchester City Galleries.

Sonia Boyce, Our removal of Waterhouse’s naked nymphs painting was art in action, The Guardian, 6 February 2018

I coordinated a Manchester Art Gallery event at which the painting was taken down. It was about giving people a say in what’s on show.

Every day, in museums all over the world, paintings are put up and taken down. More often than not, this activity takes place pretty much unannounced and unnoticed. In most cases, the decisions that inform this activity are made by professional museum curators behind closed doors.

The recent, temporary removal from Manchester Art Gallery of John William Waterhouse’s 1896 painting Hylas and the Nymphs, which depicts Hercules’ handsome male lover being lured to his death in a pond by seven long-haired, topless nymphs (pubescent girls), was an attempt to involve a much wider group of people than usual in the curatorial process.

A retrospective of my work opens at the gallery next month. As part of this I was invited by the museum to reflect on its 18th and 19th-century galleries and to make a new artwork. This is the context in which the “takedown” of Waterhouse’s painting took place. It has since been rehung by the gallery.

It is well known that the vast majority of artworks held in public collections languish, hidden from view, in storage facilities. Space constraints are one reason, but curatorial choices also play a role. Would we call these choices “censorship”?

It is very rare that a range of museum workers (public events programmers, volunteers, gallery invigilators and security staff, conservation and gallery technicians and cleaners), let alone visitors, are invited into a dialogue about what goes on or comes off the walls, or why. Such discussions inevitably bring conflicting perspectives and interpretations into play. Judgment is at the heart of art, and this type of engagement has wide cultural implications. What is beautiful to some people may appear to others to represent a problematic and pejorative system. In relation to the 19th-century galleries under discussion, for example, are there other narratives than the female subject as a deathly siren (the femme fatale) or as a submissive object to be looked at? On the opposite wall to Hylas and the Nymphs there is a topless depiction of Sappho by Charles Mengin (1877), where she stands on a cliff edge about to commit suicide due to her failed heterosexual love for Phaon. Nothing in the painting suggests her prolific and influential role as a lyrical poet, or her status as a lesbian icon.

Some museums – I suppose the type I am most interested in – consider the museum as a place to explore new meanings and to forge new relationships between people and art. In my mind, the past never sits still and contemporary art’s job is increasingly about exploring how art intersects with civic life. Institutions such as the Van Abbemuseum in Eindhoven, where there is a gallery dedicated to visitors creating their own displays, and MIMA (Middlesbrough Institute for Modern Art) where visitors are encouraged to become directly engaged in a hands-on way, are examples of how such ideas can be put into practice. The removal of Hylas and the Nymphs, at the end of a performance art event, can be seen in this context.