You are here: Home » Articles filed under: 'News' » Article: 'Out of Hand' 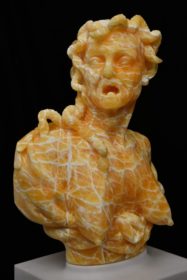 In the era of Snapchat, how to capture the culture? Something trending on Twitter as I write is soon old news on Pinterest and dead to Facebook long ago. Digital technology evolves exponentially, with the result that one day’s innovation is the next second’s redundancy.

That was precisely the problem faced by Ronald Labaco, senior curator at New York’s Museum of Arts and Design (MAD), when he unveiled his Out of Hand; Materializing the Postdigital exhibition in late 2013. “The show was two years in the planning,” Labaco explains by phone from San Diego. “But by the time the exhibition happened, some of the 3D printing techniques were already obsolete.”

The same issue confronted the curator of the Australian iteration of that show, which opened last Saturday at the Museum of Applied Arts & Sciences (aka the Powerhouse) in Sydney. “Absolutely!” says Matthew Connell, curator of computing and mathematics, and the brains behind the Out of Hand show on from now until June next year.

“In the negotiations to do this exhibition there was concern about how quickly we could proceed to put this material on display before it became obsolescent. One of the major problems I’ve had is that you can decide to include certain technologies, pay a lot of money to bring them in, then find that, by the time you show whatever it is, it’s being given away for free with the next version of Microsoft Windows.”

Out of Hand explores new technologies including 3D printing, digital knitting, and computer-numerical-controlled (CNC) milling – and the ways in which they have been harnessed by designers, architects and artists. To ensure that the exhibition resonates or, as Connell puts it, “that it will last a little bit longer than the latest craze like Pokemon Go”, he has broken Out of Hand into seven sections, each of which is anchored by a piece from the historical collection of the Museum of Applied Arts & Sciences. The idea is that by revealing antecedent, new innovations will be inscribed within an historical continuum.

Alexi Robinson, Out of Hand: Materialising the Digital, ArtsHub, 12 September 2016