You are here: Home » Articles filed under: 'News' » Article: 'Owning a dinosaur has become a trend'

Owning a dinosaur has become a trend

March 7th, 2019 | Browse other: News. | Tagged with: Booming Market for Dinosaur Fossils, Owning a dinosaur has become a trend | 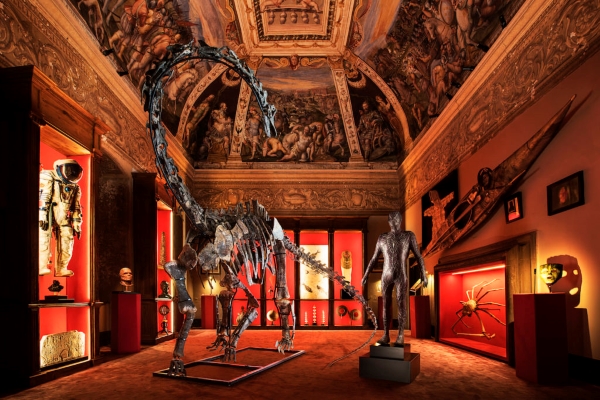 The Theatrum Mundi gallery in Arezzo, Italy, sells dinosaur relics alongside other curiosities.

Kate Brown, Forget the Old Masters, It’s All About the Old Monsters in the Booming Market for Dinosaur Fossils, ArtNet News, 21 February 2019

We can thank Steven Spielberg for the surging market, but scientists are not happy about it.

When building their prestigious collections, most collectors don’t think of adding a Tyrannosaurus Rex. But that may soon change.

Around the world, there is a growing appetite—and expanding market—for fossils of the long-dead beasts that once roamed our planet. Art fairs are beginning to put relics on view. Celebrities like Leonardo DiCaprio, Nicolas Cage, and Russell Crowe are buying them up. And auction houses are becoming increasingly aware of the show-stopping value of having an extra large dinosaur on display.

Last June, the Parisian auction house Aguttes did just that, and held a rather unusual sale inside the Eiffel Tower with only one lot: a 8.7 meter (29 foot) dinosaur of a yet-to-be identified species. The skeleton ended up going for €2 million ($2.3 million).

Elsewhere, power players Christie’s and Sotheby’s are also offering incredible rarities from the depths of prehistory, and private dealers are offering their clients awe-inducing monsters and other relics of natural history.

So, what’s behind the surge?

“Owning a dinosaur has become a trend. Their skeletons are effectively regarded as design objects,” says dealer Luca Cableri, who sells dinosaur fossils among other curiosities through his gallery, Theatrum Mundi, in Arezzo, Italy. “But few people know that a dinosaur is a work of art. Few people know the work of paleontologists, artisans, designers, and academics necessary to rebuild and restore it.” His gallery even has a paleontologist on staff, pictured donning a safari hat.

Bit by bit, dinosaurs are appearing at art fairs. Theatrum Mundi was one of four galleries at the most recent Brussels Art Fair (BRAFA) to have pieces of natural history on offer. Last year at Art Miami, a satellite of Art Basel, a special project called “DeXtinction” was organized by two mining companies. Page Six reported that Leonardo DiCaprio was at the booth eyeing a $2.5 million dollar, 120 million year-old mother and juvenile Allosaurus (though another source rebuffed the claim).

Fossils are becoming a coveted home decor object, says Eric Mickeler, a fossil specialist who helped Aguttes organize the dinosaur sale at the Eiffel Tower. And though most fossils are less expensive than the priciest unique works of contemporary art, there are only a finite number of them in existence, and significant new discoveries, like an intact skeleton, are relatively rare.

Like the art market with its darlings (Jeff Koons, Gerhard Richter), the dinosaur market also has its top “brands,” says James Hyslop, head of the department of scientific instruments, globes, and natural history at Christie’s.

The Velociraptor—characterized as a wily thug in the blockbuster Jurassic Park movies—enjoys more demand than many of its fellow reptiles. And at the top of chain, there is, of course, the mighty T.Rex skeleton, which is a true collector’s crown jewel and the most desirable of all species, according to Cableri. It can cost anywhere between €3 million and €10 million.

At the more affordable end of the spectrum, an Allosaurus can go for anywhere between €1 million and €1.5 million, while the price tag for a Triceratops’s skull is somewhere around the €150,000 to €350,000 mark. If you want to buy a medium-sized Diplodocus—a herbivore—you’re looking at €500,000 to €1 million.

In short, carnivores have a hotter market. But the real selling points are quality and rarity, which means a thriving market for other extinct species, too.

“It’s a very sculptural and beautiful form, so it’s something that appeals to collectors from contemporary art to antiquities to tribal arts, in additional to natural history collectors,” Hyslop says of the egg. “Megalodon teeth are hugely popular with collectors of tribal arts, and I suspect that is just due to the nature and shape of the object.” Megalodon were 25-ton, 34-foot-long sharks that went extinct about 2.6 million years ago.

So just like art, natural history has its mega-hits—and there are surely more great objects to surface to the market.

“I think a lot of people are surprised to learn that there are still true masterpieces of natural history readily available,” Hyslop says. “Some quarries are still being actively excavated, so there is, in a sense, a primary market for these objects, as well as a secondary market.”